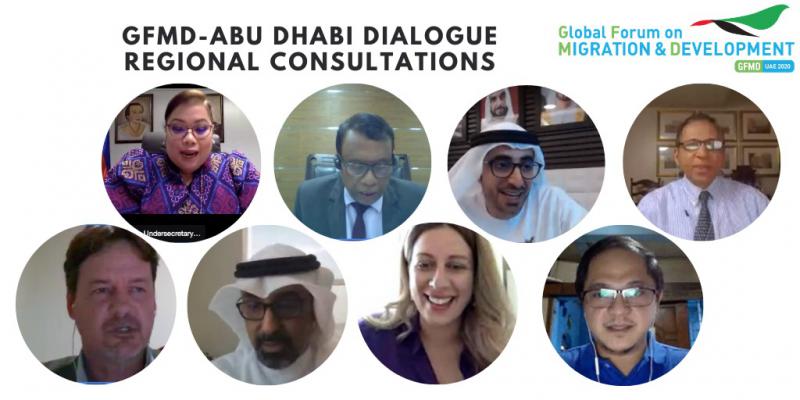 An initiative to organise six international consultations on migration has been successfully concluded. The consultations, which took place as part of the UAE’s 2020 Chairmanship of the Global Forum on Migration and Development (GFMD), encompassed participation from both Anglophone and Francophone Africa, West and South Asia, East Asia, the Americas and Europe.

Over the course of two months, 856 individuals from governments, civil society, business and city administrations around the world took part in the initiative, which all took place online. The final consultation of the six was held in cooperation with the Abu Dhabi Dialogue, the regional inter-governmental forum for West and South Asia. Two other consultations were managed in cooperation with the African Union, one with the Asia Pacific-focused Bali Process, one with the Regional Conference on Migration, bringing together the Americas, and one with the Organisation for Economic Cooperation and Development, focused on Europe.

Topics discussed by participants in the Abu Dhabi Dialogue included the impact of changing employment trends on migrant workers in the Gulf-Asia migration corridors, the role of technology in empowering migrants, and the role of partnerships in achieving the migration-related goals of the Sustainable Development Agenda. Other issues, taken up by other regions, included the skilling of migrants, filling gaps in the protection of migrants, and addressing the challenges of irregular migration.

Addressing the Closing Plenary of the GFMD Abu Dhabi Dialogue Consultation, H.E. Nasser bin Thani Juma Al Hamli, 2020 Chair of the Global Forum on Migration and Development, said, “These six regional consultations have been a major step forward in the progression of the Global Forum as a year-long process. This is the first time that the GFMD has run a comprehensive series of regional meetings, providing a platform for all governments and other stakeholders. We are grateful to our Co-Chairs of these meetings for their cooperation, and to all those who participated and shared their perspectives.”

The Global Forum on Migration and Development, founded in 2007, is the main inter-state process on migration and development, bringing together governments with other stakeholders to maximise the development outcomes of migration. The UAE took over the Chairmanship of the GFMD from the Government of Ecuador at the annual Summit, which took place in Quito in January 2019. The next annual Summit is currently scheduled to take place in Abu Dhabi in January 2021.