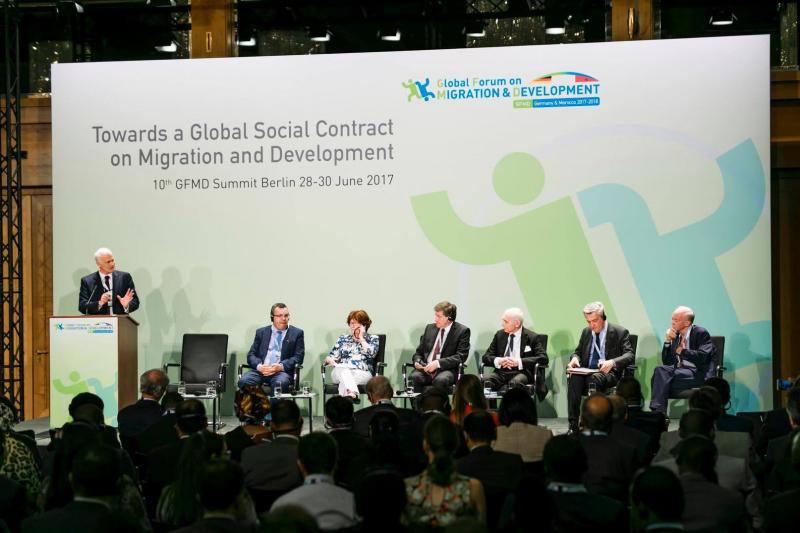 28-30 June, Berlin—The Global Forum on Migration and Development (GFMD) held the Tenth Summit Meeting at the German Federal Foreign Office under the 2017-2018 Co-Chairmanship of Germany and Morocco. Under the overarching theme: "Towards a Global Social Contract on Migration and Development,” the summit gathered around 650 participants, comprised of policymakers and practitioners from 140 states, as well as international organizations, the civil society and the private sector.

Leading the inaugural session were the GFMD Co-Chairs, Dr. Götz Schmidt-Bremme, German Ambassador for GFMD 2017-2018 Co-Chairmanship and Mr. El Habib Nadir, Secretary General for the Ministry Delegate to the Minister of Foreign Affairs and International Cooperation. In their separate statements, they emphasized the global significance of the Summit and the multi-stakeholder nature of the GFMD in the current debates on international migration governance.

Speaking for the first time in a GFMD Summit, Ms. Louise Arbour, UN Special Representative of the Secretary-General on International Migration, highlighted the need for safe, orderly and regular migration. She enjoined the GFMD to continue promoting effective international cooperation and strong political leadership, which would be vital for the success of the Global Compact on Migration (GCM). Other leaders of the United Nations also spoke during the inaugural session which include the UN High Commissioner for Refugees (UNHCR), Mr Filippo Grandi; the Director General of the International Organization for Migration (IOM); Mr William Lacy Swing; the Director General of the International Labor Organization (ILO), Mr Guy Ryder; and the Rector of the GMG 2017 Chair of United Nations University, Dr. David Malone. They affirmed their support for the continuity of the Global Forum, and shared their plans on how they can work with the GFMD in achieving common goals and in seizing the opportunities presented by the GCM.

Kicking off the second day of the Summit were two simultaneous Special Sessions on the Future of the Forum (FOF) and the Platform for Partnerships (PfP). The FOF session concluded with a general consensus that the GFMD must continue as a multi-stakeholder space for constructive debates, innovation and cooperation.  The PfP session, on the other hand, featured new migration and development initiatives that are also thematically aligned with the Summit RT topics.

Thereafter, simultaneous Side Events featured innovative policies and programs to complement the roundtable sessions in the first day. The  GFMD Business Mechanism Meeting then ensued to discuss the private sector’s role and possible contributions to the GCM, which are described in the Business Report entitled “Toward a Global Compact on Migration: Perspectives on Labour Migration from the GFMD Business Mechanism.”

Finally, the Common Space was held on June 30 to provide a platform for direct interaction between states, civil society and other stakeholders as they reflect on their mutual interests and common objectives in regard to the GCM. The 2017 Common Space was informed by the Ten Recommendations that came of the 2017 Civil Society Days and the Mayors’ Declaration, a key outcome of the Global Mayor Forum on Mobility, Migration and Development held on 26-27 June.

The closing of the Summit showcased the Co-Chairs’ Conclusions  which were delivered by Ambassador Schmidt-Bremme for Co-Chair Germany. For his part, Mr. Nadir affirmed Co-Chair Morocco’s commitment to follow through on the GFMD’s ambition to contribute to the GCM process, including the implementation and follow up of the Global Compact when it finally takes shape. As well, GFMD in 2018 will strive to contribute to the follow up of the migration-related commitments in the 2030 Agenda.