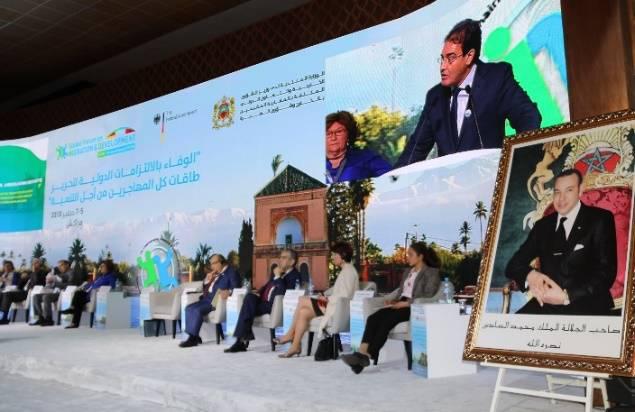 5 to 7 December, Marrakesh —On the eve of the historic Intergovernmental Conference to Adopt the Global Compact for Safe, Orderly and Regular Migration (GCM), the German and Moroccan GFMD Co-Chairs convened the Eleventh GFMD Summit, marking the culmination of the two-year Chairmanship from the beginning of 2017 to the end of 2018. Under the overarching theme: “Honoring International Commitments to Unlock the Potential of All Migrants for Development,” the event saw the participation of over 2,000 delegates from 135 United Nations Member States, 45 international organizations, civil society, private sector, academia, and other migration stakeholders.

In welcoming the participants at the inaugural session, the Moroccan and German GFMD Co-Chairs, Mr. El Habib Nadir and Ambassador Götz Schmidt-Bremme, took stock of the achievements made in the framework of their Co-Chairmanship, highlighting the substantial contribution of the Forum in the review of the implementation of the 2030 Agenda for Sustainable Development and the elaboration of the UN-led Global Compact.

In her capacity as the UN Special Representative of the Secretary-General on International Migration, Ms. Louise Arbour emphasized that the Forum can provide an ample room for Member States to discuss how to achieve the objectives of the GCM, and to contribute to its implementation through the exchange of experiences and innovative approaches. Other senior officials of the UN and leaders of various sectors also delivered their statements during the inaugural session: Mr. Abdelkrim Benoutiq, Minister Delegate in charge of Moroccan Living Abroad and Migration Affairs; Mr. Antonio Vitorino, Director General of the International Organization for Migration, Mr. Driss El Yazami, President of National Human Rights Council; Ms. Asako Okai, Assistant Secretary General and Director of Crisis Bureau, UNDP; Ambassador Regine De Clercq, GFMD 2007 Chair; Mr. Stephane Jaquemet, Director of Policy of ICMC; Mr. Roberto Suarez-Santos, Secretary-General of IOE; and Ms. Yasmin Youssef, representative of young migrants. More than 40 high-level government representatives, comprised of ministers and vice ministers, as well as senior officials of various international organizations also graced the opening ceremony.

The GFMD Common Space followed the opening session, focusing on the theme “From Global Commitments to Multi-Stakeholder Action.” Comprised of a Davos-style panel session and four parallel thematic sessions, speakers, representing various stakeholders, articulated their institutional perspectives on how global commitments contained in the GCM can be amplified through their already existing initiatives on the ground, and in cooperation with the UN Migration Network. 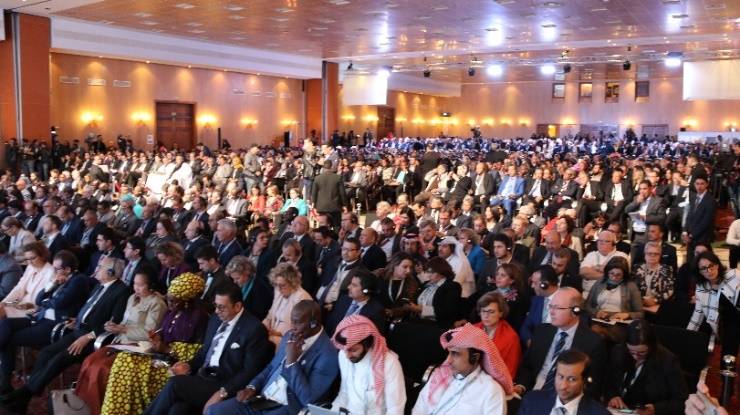 Meanwhile, the GFMD Business Mechanism Meeting presented stories, reactions and recommendations from both business and governments around the theme “Implementation of the GCM: how business will judge success in the 21st century world of work.” They also elaborated the business perspective on how migration will address the complex skills gaps experienced by businesses and how they can further advocate for a positive narrative on migration. Moreover, twelve side events and a workshop were organized independently by proponent governments and non-state partners, complementing the focus of the RT sessions and the objectives of the GCM.

On the final day, two simultaneous Special Sessions on the Future of the Forum (FOF) and the Platform for Partnerships (PfP) were held. The PFP session presented five state-of-the-art state-led and multi-stakeholder initiatives, including the introduction of the “GFMD Marketplace” which envisions the Forum as a “matchmaking mechanism” that can link those facing specific policy and practice issues and those that can provide targeted solutions. The FOF session, on the other hand, took stock of the progress made in since the Berlin GFMD Summit and gathered perspectives from Member States on how the GFMD can strategically situate itself in the era of GCM implementation. The findings contained in the Ten-Year Review were also presented, highlighting the three elements of the GFMD’s added value: (1) offering networking opportunities, (2) facilitating partnerships, and (3) acquiring knowledge.

The closing session of the Summit served as an occasion to formally introduce the establishment of the Mayors Mechanism in the GFMD that formalizes the links of the local authorities with the Forum. Ms. Valérie Plante, Mayor of Montreal, Canada, delivered a keynote address on the critical role of cities in migration management and applauded the GFMD for welcoming the formal presence of local authorities in GFMD discussions.

The Summit concluded with a symbolic handover of the GFMD Chairmanship from the outgoing Moroccan and German Co-Chairs Chairs to the incoming GFMD Chair, Mr. Santiago Javier Chavez Pareja, Vice Minister for Human Mobility of the Government of Ecuador. The outgoing Co-Chairs both enjoined the GFMD community to support the implementation, follow-up and review of the GCM and make a case for migration as a basis for development. The Ecuadorian 2019 Chair vowed to build upon the achievements and milestones that have been achieved in relation to the Global Compact and the 2030 Agenda and maintain the Forum as a broad, informal and flexible space for the advancement of strategic partnerships and international cooperation on migration and development.