GFMD After 10th Summit in Berlin 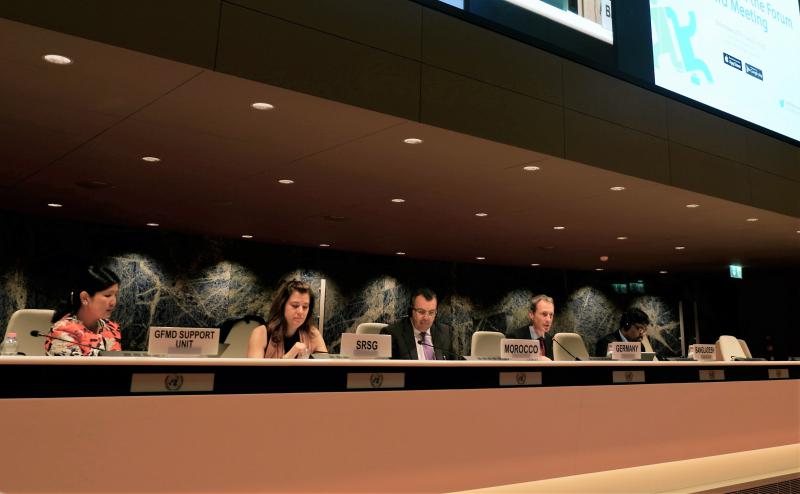 (9 October, Geneva) Ahead of the United Nations-led GCM consultative meetings on 12-13 October in Geneva, the German and Moroccan GFMD Co-Chairs convened the Third Preparatory Meetings to inform the Troika, Steering Group (SG) and Friends of the Forum (FOF) of the status of the GFMD’s draft contribution to the Global Compact for Migration (GCM), with particular emphasis on Chapter 3 concerning the future role of the GFMD in the framework of the GCM implementation and follow up. The meetings also served as the first occasion to present the agenda and thematic priorities of the GFMD Co-Chairmanship in 2018.

Taking the helm of the GFMD preparatory process towards the 11th GFMD Summit in Marrakesh, Mr. El Habib Nadir, GFMD Moroccan Co-Chair, announced that GFMD 2018 will be centered on translating GCM commitments into ‘action.’ In addition, the proposed thematic agenda of the 11th GFMD Summit will revolve around three themes—‘From vulnerability to resilience,’ ‘South-South Mobility’ and ‘Drivers of Migration and Human Security.’ GFMD Roundtables, thematic workshops and side events will be organized throughout the year, in preparation for the Marrakesh Summit on 4 to 6 December 2018.

Mr. Sönke Lorenz, speaking on behalf of the German GFMD Co-Chair, Ambassador Götz Schmidt-Bremme, expressed full support for Morocco’s plans and affirmed that the themes and activities offer coherence and continuity to the agenda of the 2017-2018 Co-Chairmanship. In his view, the suggested thematic focus of GFMD 2018 reinforces the Co-Chairmanship’s objective to create a global social contract, while integrating new elements.

Ms. Amy Muedin, representing the UN SRSG Ms. Louise Arbour, addressed both the Steering Group and the Friends of the Forum meetings to highlight the progress of the GCM process, clarify the role of the key actors involved in the different phases, and elaborate on the next steps. She conveyed the SRSG’s vision for the GCM: i.e., people-centered, emphasizes international cooperation and forward-looking. She acknowledged the GFMD’s vital contribution in advancing the overall discourse and cooperation on migration and development issues leading to the GCM. As the success of the GCM depends on the willingness and capacities of states to implement it, the GFMD in her view could provide crucial support and add value to the GCM through confidence building and experience sharing, and by bridging the existing gaps between Geneva, New York and the capitals.

The GFMD Co-Chairmanship is committed towards supporting the Global Compact for Migration (GCM) process. To date, four GCM-focused events have already been organized – one in New York (November 2016), two in Geneva (February and April 2017) and a stocktaking event in Vienna (September 2017). Building on these four GCM events, the draft contribution of the GFMD is currently being finalized under the lead of the GFMD Ad hoc WG on 2030 Agenda and the GCM. The full report will be submitted as a GFMD contribution to the GCM before the scheduled GCM stocktaking in Puerto Vallarta, Mexico on 4 to 6 December 2017.

To view the photos of the event, click here.

The summary reports of the Steering Group and the Friends of the Forum here.