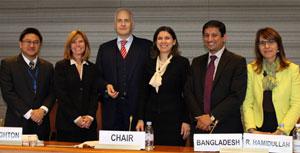 Geneva-05 February 2015. The first GFMD Thematic Meeting on “Migration in the Post-2015 UN Development Agenda” was held in Geneva, bringing together around 150 policymakers and officials from UN Member States and representatives of international organizations and the civil society. The meeting was co-convened by the Governments of Bangladesh and Germany.

At the opening session, Amb. Mehmet Samsar, Director General for Consular Affairs of the Turkish Ministry of Foreign Affairs, remarked that it was a very critical time for the evolution of the post-2015 UN Development agenda. With the Open Working Group’s (OWG) report and the UN Secretary Generals’ Synthesis Report as points of departure, the Turkish Chair encouraged delegates to take the discussion of the thematic meeting beyond the abstract by considering what including migration in the post-2015 development agenda would mean in practice, and reviewing what progress has been made on including migration-related goals, targets and indicators in the agenda.

Co-convenor Bangladesh, represented by Mr. Riaz Hamidullah, MFA Director General, recalled the progress achieved by the international community in the past 2 years and urged participants to look closely at smart migration-relevant goals coming out of the 3 or 4 targets in the OWG’s report, as well as those coming from other goals that are intertwined with the elements of migration.

The post-2015 development agenda for sustainable development is a very high priority for the German government, according to Dr. Götz Schmidt-Bremme, Director for Legal and Consular Issues of the German Federal Foreign Office. Migrants are important agents of development and partners in development cooperation. Therefore, development-sensitive and migrant-centered policies should be in place to reduce the negatives and to ensure that migration can benefit both parties. The direct and indirect references to human mobility in the proposal can be summed up as harnessing the potential offered by migration, as well as reducing the risks and costs of migration.

Mr. Gregory Maniatis, Special Advisor of the UN Secretary General’s Special Representative for International Migration, saw the potential role of the GFMD in showcasing government practices in the areas covered by migration targets, including monitoring efforts of the Global Migration Group (GMG). He further believed that the GFMD could respond to the Secretary General’s suggestion for state-led, evidence-based processes, including thematic reviews, to monitor the progress of the Post-2015 agenda. He urged participants to actively reach out to the negotiating colleagues in New York and share with them the knowledge about migration and development, to help solidify their support for migration’s robust inclusion in the Post-2015 agenda.

Speaking on behalf of the civil society, Mr. John Bingham, Policy Director of the International Catholic Migration (ICMC), drew attention to the Stockholm Agenda which indicates a unified, logical and achievable set of targets and goals elaborated by the civil society. He expressed civil society’s objective to be involved in establishing the indicators and in measuring target implementation given their work on the ground. 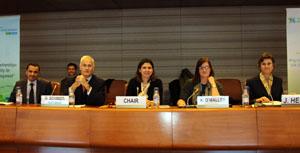 The meeting focused on two of the proposed targets in the Open Working Groups’ draft report – promoting decent work for migrants and facilitating well-managed migration. The first session on “Promoting Decent work” was moderated by Mr. Riaz Hamidullah, Director General of the Bangladeshi Ministry of Foreign Affairs. The International Labour Organization (ILO) provided a conceptual framework to the session, followed by country presentations from Thailand and Italy.

The second session on “Facilitating Well-managed Migration” was steered by Dr. Götz Schmidt-Bremme, Director for Legal and Consular Issues of the German Federal Foreign Office. The International Organization for Migration (IOM) framed the issues for discussion, while Australia and Morocco shared their national experiences. Both sessions sparked interventions from the floor from both governments and international organizations. Countries from all regions showcased their national policies and programs that are already in place along these lines, and suggested how actions on migration can be monitored, followed up, and disseminated.

We are in the early stages of global awareness that migration is not only a profound, enduring theme in human history—but also one that can be proactively and positively shaped by the policies and actions of governments, the private sector, civil society, and

During the special session on “GMG Perspective and Future Work on Migration in Post-2015 Development Agenda,” Ms. Esen Altuğ, Deputy Director General for Migration, Asylum and Visa of the Turkish MFA, sought the views of the GMG, currently headed by the World Bank represented by Mr. Dilip Ratha, and the UN Department of Economic and Social Affairs represented by Mr. Bela Hovy on the migration-related targets, definitions and indicators being proposed, and what governments could realistically do moving forward.

Mr. Ratha highlighted Migration and the Post-2015 Development Agenda as a key thematic priority of the GMG for 2015. The GMG has proposed several possible migration-specific goals for the post-2015 agenda indicators, to be pursued via the work streams of individual GMG agencies or working groups. In addition, the GMG will deepen and expand its existing partnership with the GFMD. Mr. Hovy, on the other hand, shared some ideas on how countries could work with the GMG in developing indicators, clarifying definitions, defining statistical development strategies, and understanding the cost implications, data quality and continuity of the post-2015 agenda. 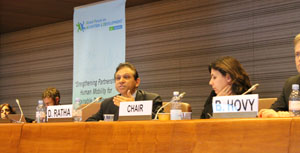 In closing the meeting, Ms. Altuğ, thanked all presentors and intervenors for a very enriching and insightful debate, adding that “these presentations and the discussions that followed represent one of the best aspects of the GFMD: its ability to bring governments and other stakeholders together to learn from each other’s experiences, and to share pragmatic, field-tested ideas that can leverage high accomplishments.”

She stressed the need to focus on migration targets for the SDGs, and to insist, during the final negotiation of the post-2015 development agenda, that migration has a place that reflects its vital importance in realizing human rights and enabling progress toward greater equality and prosperity for all.  She underscored the GFMD’s influential role in promoting a strong consensus and developing coalitions of interest around the migration aspects of the UN development agenda.