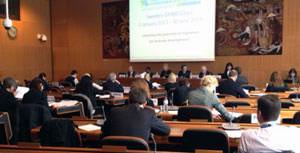 Geneva – 28 February 2013. Ambassador Eva Åkerman Börje, GFMD 2013-2014 Chair, rallied the GFMD Steering Group and the Friends of the Forum to meet the challenge of “Unlocking the Potential of Migration for Inclusive Development” when she convened the first successive meetings of the two GFMD bodies on Wednesday, 13 February 2013 in Geneva.

Flanked by the GFMD Troika members Mauritius (2012 Chair) and Turkey (2015 Chair) and the Special Representative of the UN Secretary General (SRSG) Sir Peter Sutherland, the Swedish GFMD Chair invited some 150 delegates to take the GFMD to a new, upgraded phase and make it more development-focused, more dynamic and more durable. These three mutually reinforcing key objectives concerning the substance, process and sustainable impact of the Forum are embodied in the ambitious Concept Paper and Work Plan presented by the Swedish Chair.

At the heart of the GFMD 2013-2014 central theme is the assumption that governments can provide the key to help unlock the potential that each migrant holds to contribute to social, economic and human development, through an adequate policy mix, legal framework, comprehensive policies and cooperation. To this end, the Swedish Chair will facilitate GFMD discussions on finding the fitting key(s) for Governments and partners to use at the national, regional and global levels.

Delegates from 29 SG Members and 104 Friends of the Forum Governments and Observers gave the Swedish Chair a resounding support for the overarching theme and the proposed Roundtables, as well as the varied initiatives that build upon previous GFMD Chair’s achievements and respond to the recommendations of the GFMD Assessment.

The meetings also afforded the opportunity of introducing the members of the Swedish GFMD Secretariat who will spearhead the substantive and logistical preparations of the 7th Summit Meeting to be held in Stockholm on 14-16 May 2014.

As in the past, the Swedish Chair consulted first with the Steering Group on strategic and policy issues outlined in the draft concept paper. GFMD 2013-2014 will attempt to strengthen the development dimension within the GFMD by engaging more development practitioners in the process and linking GFMD discussions to the Post-2015 Global Development Agenda. Running over a period of 18 months, the Swedish Chairmanship will embark on a series of activities leading to the 7th GFMD Summit Meeting in 2014. These include the usual consultative meetings of the Steering Group and Friends of the Forum in Geneva; up to three thematic meetings on the crucial topics of 1) mainstreaming migration and Post-2015, 2) labour matching tools, migration and circular mobility, and 3) diaspora engagement through investments and trade; a business roundtable in early 2014; new mechanisms geared towards improving the communications system and evidence base of the GFMD such as online consultations, a GFMD Expert Network, and a Policy and Practice Database. The existing Platform for Partnerships will also be upgraded and enhanced to promote knowledge building and sharing with the global community.

Friends of the Forum Meeting

The Friends of the Forum (FOF) equally welcomed the proposals of the Swedish GFMD Chair included in the Concept Paper and Work Plan, as well as the SRSG’s suggestion to benefit from lessons learnt from the GFMD for the upcoming UN High Level Dialogue in October 2013. The FOF meeting also included a presentation on the highlights and outcomes of the GFMD 2012 Summit Meeting by the Government of Mauritius, represented by Ambassador Israhyananda Dhalladoo. Two feature presentations were made by the Swedish Team – 1) on the format of the Thematic Recollection which will be submitted by the GFMD as an input to the UN HLD and 2) on an initial Swedish perspective on migration and its links with the Post-2015 Development Agenda. Mr John Bingham of the International Catholic Migration Commission (ICMC) also addressed the FOF to report on the GFMD 2012 civil society process and initial plans for GFMD 2013-2014.

In both meetings, Ambassador Åkerman Börje initiated a discussion on the challenges of GFMD funding, especially since the Swedish Chairmanship will last for 18 months. Stressing the need to ensure the sustainability of the process, she urged Governments to support the setting up of a multi-annual work program. Incoming GFMD 2015 Chair Turkey pledged its commitment to work with the Swedish Chair in this regard.