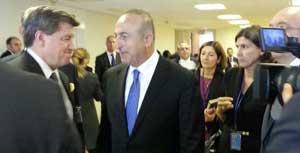 24 Sept 2014 – Around 120 participants, including Ministers, Deputy Ministers,  Permanent Representatives of UN Member States, and representatives of various UN Agencies gathered on 22 Sept 2014 at the Turkish Center in New York to mark the launch of the Turkish Chairmanship of the Global Forum on Migration and Development (GFMD) for the period 1 July 2014 to 31 December 2015.

In his welcome remarks, Minister Çavuşoğlu enunciated that ‘migration is a fact of life in our globalizing world.’ Turkey is committed to spare no effort in strengthening the role of the GFMD as an arena where policies aiming to enhance the development benefits of migration can be generated, discussed and shared. Recognizing the value in strengthening the influence of the GFMD process within the UN system, the Turkish Chair will work to build on the Declaration of last year’s High Level Dialogue on International Migration and Development.

The Turkish GFMD Chairmanship has chosen as its main theme, “Strengthening Partnerships: Human Mobility for Sustainable Development” to underline the fact that international migration cannot be managed effectively by any one country alone, or by states without the cooperation of international organizations, civil society, the private sector and migrants themselves.  Around 232 million migrants oblige states and crucial partners to work together to promote migrants’ well-being and prosperity, and to improve public perceptions of migrants and migration.

Turkey takes this challenge very seriously, given the fact that there are more than 1.5 million Syrians sheltered in Turkey, of whom some 220,000 live in camps. The government of Turkey has spent more than $3.5 billion to care of them, and the Turkish people much more. Minister Çavuşoğlu thus called upon the international community to assist countries bordering Syria that generously host people who have fled from the war, and to urgently find sustainable, long-term arrangements to take care of Syrians and other forced migrants.

Minister Çavuşoğlu mentioned the inclusion of migration in the post-2015 UN Development Agenda as a key priority for the Turkish Chairmanship, as well as creative partnership with the private sector in international migration and the contribution of women migrants to social and economic development. He also announced that Turkey will assume the Presidency of the G-20 in 2015 and host the World Humanitarian Summit (WHS) in 2016 - the first ever WHS meeting to address the topic of migration as a cross-cutting issue.

UN Deputy-Secretary-General Eliasson commended Turkey for taking the lead in organizing the next meeting of the Global Forum which has become the main platform for informal dialogue and cooperation on migration and development. He believed that given Turkey’s migration experience and the current humanitarian challenges it faces, the Turkish Chairmanship of the Global Forum will bring a new and important perspective to advance the global debate and to address regional concerns. He gave assurance that the United Nations, particularly Mr. Peter Sutherland, the Special Representative of the Secretary-General for Migration (SRSG), stands ready to assist Turkey in making its GFMD chairmanship a very successful one.

While renewing the support of the 18 GMG member agencies for the Turkish GFMD Chairmanship, ILO Director-General Ryder looked forward to continue the dialogue among the GMG and the GFMD Troikas, with SRSG Sutherland, in identifying areas for concerted focus. As Chair of the GMG, Mr. Ryder encouraged a more systematic engagement between GMG agencies and governments participating in the GFMD. He thanked the previous Swedish Chair and the present Turkish Chair for facilitating a genuine two-way dialogue. He reiterated a number of thematic areas that the GFMD and GMG agencies could work together, such as mainstreaming migration into development, reducing labour migration costs, including exploitive recruitment practices, and promoting gender-responsive migration policies. He emphasized the need to ensure that the outputs, content and nature of discussions taking place in multilateral settings are drilled down to the realities on the ground. In this regard, he reported that in July the GMG Principals tasked the GMG to establish guidance for the United Nations Development Assistance Frameworks (UNDAFs) and to assist Member States in appropriately integrating migration into national development plans and processes. The GMG Principals will also endorse a draft communiqué on migration and development for consideration in the post 2015 deliberations.