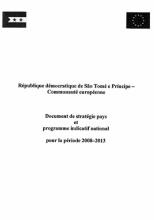 The country's production and exports are extremely poorly diversified, with cocoa representing nearly 80% of exports. To balance the current account, the government has to resort to debt and external official assistance, which pushed public debt to USD 316.3 million in 2005 and the cost of servicing the debt to 57% of GDP. Inflation is also a serious problem which undermines the national economy (17% in 2005). Integration into the regional and world markets is practically non-existent given the fact that São Tomé e Príncipe is an island and is not a party to CEMAC (where it has observer status) or the WTO (for which it has formulated an application for membership).

São Tomé e Príncipe has some strengths. It is a politically stable country which enjoys social peace and an absence of conflict. There is a genuine resolve to combat poverty, reflected in the adoption of a national strategy on the issue (PRSP) and a priority action programme for the period 2006-2008, endorsed by the development partners at a round table in Brussels in December 2005. In 2007 São Tomé e Príncipe reached the completion point for the HIPC Initiative, making it eligible for debt relief. The process is currently underway at both multilateral and bilateral level. The existence of offshore oil has been confirmed and production should begin by 2012, although the date has already been put back several times and future production levels are as yet unknown.

The European Commission's cooperation strategy for the period 2008-2013 (10th EDF) is based on the priorities of the growth and poverty reduction strategy set out by São Tomé e Príncipe in its PRSP. The Commission will contribute to the process in the areas where it has already had a successful experience in the country and where its action complements that of other donors. The partnership will cover:

The programme ensures continuity with the choices made under the 8th and 9th EDFs and pays particular attention to the integration of civil society and non-state actors into the various operations undertaken, including the implementation of the EPA which is currently under preparation. Special emphasis will also be put on good governance, in particular in the area of public finance.

“A Migration Profile is a country-owned tool, prepared in consultation with a broad range of stakeholders, which can be used to enhance policy coherence, evidence-based policymaking and the mainstreaming of migration into development plans.” (IOM, 2011)