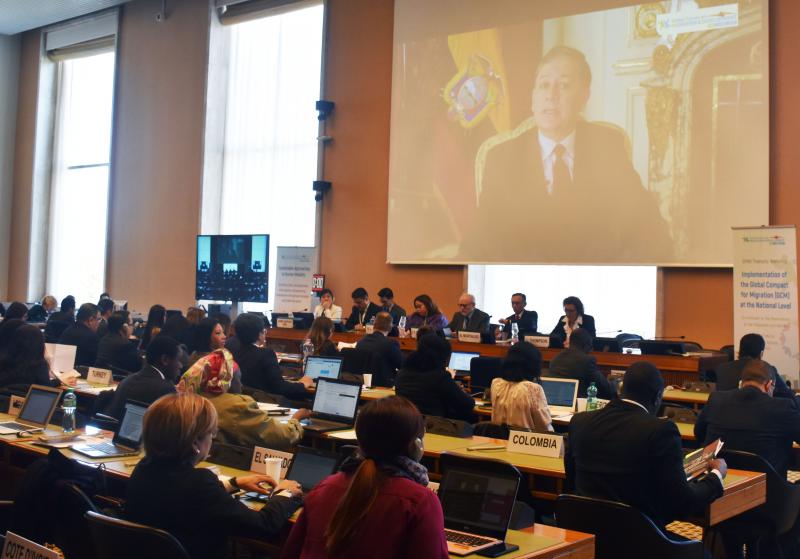 On March 21-22, the Global Forum on Migration and Development (GFMD) 2019 Chairmanship of the Government of Ecuador, together with the co-convening Governments of the Philippines and Bahrain, organized the first GFMD Thematic Workshop on the implementation of the Global Compact for Migration (GCM) at the national level. Under the theme “Towards a Common Vision and Joint Action in Implementing the GCM at the National Level,” the workshop gathered around 190 participants from 89 UN Member States and over 40 civil society, private sector and international organizations.

In a video message, GFMD 2019 Chair Ambassador Santiago Javier Chávez Pareja, Vice Minister for Human Mobility of Ecuador, opened the session by highlighting that the workshop was a logical step after the adoption of the Global Compact. The workshop, he asserted, aimed to serve as a space for dialogue and exchange of practices to inform Member States on how to formulate their respective national GCM implementation plans. In his welcome remarks, Ambassador Emilio Rafael Izquierdo Miño, Permanent Representative of Ecuador to the UNOG, emphasized that the topic of the workshop was timely and necessary to enrich the menu of actionable commitments provided for in the GCM, thus ensuring its successful implementation and the goal of “leaving no one behind.”

Representing co-convener Philippines was Ms. Sarah Lou Arriola, Department of Foreign Affairs Undersecretary for Migrant Workers’ Affairs, who highlighted that the workshop was convened for the benefit of those states that endorsed the GCM and also those that have expressed their reservations. On the other hand, co-convener Bahrain’s representative, Mr. Ausamah Al Absi, Labor Market Regulatory Authority Chief Executive Officer, reminded all participants to be mindful of the negative sentiments and heated debate that accompanied the development of the Global Compact. Both co-conveners underlined the need to ensure that the Compact’s principles take root and its objectives are implemented.

In her keynote address, Ambassador Laura Thompson, IOM Deputy Director General emphasized that there is no “one size fits all” model for the GCM implementation, noting that every state will need to determine for itself what steps to take. From IOM’s viewpoint, there are three possible GCM implementation approaches—(1) a systematic and robust approach which follows the four-year GCM review cycle; (2) a selective approach where governments decide to match their existing priorities to relevant GCM objectives; and (3) business as usual approach which is doing nothing at all. During the brief open discussion, interveners insisted that the third approach was not an option at the outset.

The opening was followed by a framing session of the three “knowledge café” thematic discussions.  As explained by the moderator, Ms. Kathleen Newland, this new format of conducting GFMD debates was in response to the GFMD Review recommendation to make the GFMD discussions more interactive and action-oriented.  She introduced the thematic focus of the three sessions: (1) human rights, (2) regular pathways, and (3) fair recruitment and decent work, to be hosted by thematic experts from the OHCHR (Ms. Pia Oberoi), UNDP (Mr. Riad Meddeb), and ILO (Ms. Michelle Leighton), respectively. Thereafter, these thematic expert “hosts” moderated the simultaneous café sessions in three successive rounds over the course of the day. They encouraged participants to speak to the guiding questions and highlight the challenges, opportunities and practices relevant to the topic. Responding positively, participants actively took part in the discussions, posed questions and candidly shared concrete and varied experiences.

The second day began with a wrap up of the main outcomes of the three knowledge café sessions. In their reports, the expert hosts highlighted that there are existing tools and mechanisms to jumpstart the implementation of the actionable commitments in the GCM, and that the inclusion of migrants’ voices in policymaking, implementation and evaluation is crucial.

Moderated by Mr. Jonathan Prentice, the first multi-stakeholder panel on “Ensuring successful GCM Implementation - A Collective Aspiration and a Shared Responsibility” featured Ms. Sarah Lou Arriola and Mr. Ausamah Al Absi, who shared the experiences of the Philippines and Bahrain in bilateral negotiations as sending and receiving countries; Ms. Alexis Bautista of  Migrant Forum in Asia (civil society);  Mr. Michiel van Campen of Permits Foundation (private sector); Mr. Lefteris Papagiannakis, Vice-Mayor for Migrants, Refugees and Municipal Decentralization, City of Athens, and Mr. Rainer Kern, Office of the Mayor, City of Mannheim (local authorities).  The speakers articulated their perspectives and current efforts on advancing GCM implementation through the sectors and organizations they represent, as well as the importance of whole-of-government and whole-of-society approaches and multi-stakeholder partnerships in ensuring the protection of migrants’ human rights, the creation of safe and regular channels for migration, and migrants’ access to basic services and labor markets.

The second panel on “Ensuring successful GCM Implementation – National Perspectives on Lessons Learned as a way to develop / improve existing national plan” was moderated by Mr. Stephane Jaquemet. Ambassador Raúl Heredia, Deputy Permanent Representative of Mexico to the UNOG and  Mr. Mohamed Amine Boukhris, First Secretary of the Permanent Mission of Morocco to the UNOG shared about their national policies and initiatives on migration, and plans to harmonize them with the objectives enshrined in the Global Compact. Speaking on behalf of IOM, Coordinator of the UN Network for Migration, Ms. Jill Helke explained the systematic and capacity building support towards GCM implementation that Member States can leverage through the UN Network and IOM, particularly at the country level.

During the closing session, Ms. Kathleeen Newland stressed the need for both horizontal integration (among concerned stakeholders from governments, civil society, private sector, academia, etc.) and vertical integration (at the local, national, regional and global levels) in order to ensure a successful GCM implementation. As co-conveners of the workshop, Ambassador Evan P. Garcia, Permanent Representative of the Philippines to the UNOG, and Mr. Ausamah Al Absi, expressed their thanks to GFMD 2019 Chair and their optimism that the two-day workshop had served as a fertile ground to cultivate partnerships, share lessons and good practices, and operationalize internationally agreed commitments. Finally, Ambassador Emilio Rafael Izquierdo Miño conveyed his thanks to the co-conveners and participants on behalf of the GFMD 2019 Chairmanship, and counted on the continued support of Member States and other stakeholders for the GFMD’s overall efforts to contribute to the systematic, solid and inclusive implementation of the Global Compact.

An outcome document summarizing the discussions in this two-day thematic meeting will be distributed in due course to all Friends of the Forum; to the International Organization for Migration in its capacity as the Coordinator and Secretariat of the UN Migration Network; and to the UN Secretary General as an input to his regular reports on international migration.

For the photos of this thematic workshop, visit this album.