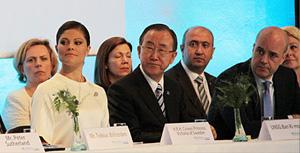 On 14 to 16 May 2014, Sweden hosted the 7th GFMD Forum Meeting in Stockholm with the overarching theme “Unlocking the potential of migration for inclusive development.” The meeting which gathered some 900 delegates from 140 countries and 30 international organizations kicked off on 14 May with a grand opening ceremony. Swedish Minister for Migration Tobias Billström and Swedish Minister from International Development Cooperation Hillevi Engström, gave welcome remarks while H.R.H. Crown Princess Victoria of Sweden and Swedish Prime Minister Fredrik Reinfeldt delivered inspiring opening speeches.

During the opening session, the United Nations Secretary General (UNSG), Mr. Ban Ki-moon, delivered a key note message to all delegates representing a wide range of civil society organisations, the private sector, international organisations and governments, including Ministries and Departments of Immigration, Development, Labour, Foreign Affairs, Gender Equality, Justice, Integration and Nationals Abroad. The UNSG called on all countries to rally around the common goals of protecting human rights, lowering the costs of migration, ending exploitation, helping stranded migrants, raising public awareness, integrating migration into the development agenda, gathering more reliable data, and enhancing partnerships. He enunciated that migration should be a journey of hope, not a perilous gamble in which migrants and their family members risk their lives and livelihoods.

Mr. Mevlüt ÇAVUŞOĞLU, Minister for EU Affairs of the Republic of Turkey, shared some perspectives from the incoming GFMD Chair Turkey, while Ms. Michele LeVoy, reported on the outcomes of the GFMD 2013-2014 Civil Society Days held 12 and 13 May 2014.

GFMD 2014 Common Space (14 May)
With the central theme, “Partnering to realise the potential of migrants and migration for inclusive development,” the GFMD 2014 Common Space witnessed further trust-building and frank discussions between governments, civil society and international organizations. Chaired by Mr. Peter Sutherland, UN Special Representative of the Secretary General (SRSG) for International Migration and Development, the GFMD 2014 Common Space (CS) began in plenary with a very enlightening presentation by Professor Hans Rosling. Three simultaneous CS sessions then ensued, focusing on the issues of migration in the post-2015 development agenda, decent labour migration and employment, and migrants’ empowerment for social inclusion and human development. The conclusions of the break-out sessions were then reported in plenary by the CS session moderators.

Intensive Roundtable Discussions (15 to 16 May)
Three successive rounds of Roundtable discussions and Special Sesssions (on the Future of the Forum and the GFMD Platform for Partnerships) were organized from 15 to 16 May.  Each day rolled out with a brief plenary session led by Ambassador Eva Åkerman Börje, together with special guests from the European Union and the Global Migration Group, respectively. Ambassador Åkerman Börje chaired all preparatory meetings of GFMD 2013-2014 in Geneva and represented Sweden as Chair of the GFMD process beginning January 2013.

In the afternoon of 16 May, the outcomes of various deliberations were reported to all delegates by the Roundtable General Rapporteurs and the Special Session rapporteurs, followed by comments from the SRSG, Mr. Sutherland.

At the closing plenary session, Ambassador Åkerman Börje delivered her conclusions on behalf of the Swedish Chair of the Global Forum. She then handed over the GFMD Chairmanship plaque to Ms. Esen Altug, representing incoming GFMD Chair Turkey. The latter gave a statement on behalf of the Government of Turkey, expressing appreciation to Sweden for its excellent stewardship of the GFMD process, and enjoining all delegates to support the Turkish Chairmanship.

In closing the 7th GFMD Forum Meeting, Minister Billström and Minister Engström thanked all delegates for their active participation and affirmed Sweden’s commitment to the Global Forum and the inclusion of migration in the post 2015 development agenda.