The GFMD’s relationship with IOM

Since the inception of the GFMD in 2007, the International Organization for Migration (IOM) has remained as the closest institutional partner of the GFMD. While remaining a distinct and independent process, the GFMD has maintained a close working relationship with IOM from one Chairmanship to the next.

The IOM has provided administrative, logistical, financial management and substantive support to the Forum. Crucially, the IOM hosts the GFMD Support Unit in Geneva, which provides multi-pronged services to the rotating Chairs-in-Office of the GFMD. By virtue of a Memorandum of Understanding signed by the GFMD 2008 Troika, as amended in 2015, IOM’s scope of services to the GFMD Support Unit covers personnel management, financial management, legal advice and contracts, insurance coverage, information technology, procurement services, travel services and security.

In addition, IOM has consistently offered technical and substantive support to the GFMD, in variable degrees depending on the Chair’s requirements. This includes conceptualization of the Chair’s thematic priorities, leading the drafting process for a number of GFMD Roundtable background papers, providing key speakers during GFMD events, and on occasion seconding international advisors to the GFMD. The Forum’s primary contact point with IOM is IOM’s International Cooperation and Partnerships (ICP) Division.

The IOM’s entry into the United Nations provides a platform for a closer relationship between the GFMD and the UN System . This relationship is likely to deepen as IOM takes on the role of Coordinator and Secretariat of the UN Migration Network.

The UN Migration Network and the GFMD

The United Nations Network on Migration

The UN Secretary-General’s report “Making migration work for all”, released in December 2017, suggested the strengthening of the UN system’s cooperation on migration so that it might support Member States in implementing the Global Compact for Safe, Regular and Orderly Migration (GCM), acting as an organizer and a source of policy guidance and ideas. Following the adoption of the GCM in December 2018, the United Nations Network on Migration was established, succeeding the inter-agency Global Migration Group (GMG).

The Network brings together 39 members of the UN system to ensure effective, timely and coordinated system-wide support to Member States. It is designed not to duplicate other initiatives, but rather to help support and coordinate Member States’ implementation of the GCM at the country and regional levels. The International Organization for Migration (IOM) plays a central role in the Network, being designated as the Coordinator and Secretariat for all its constituent parts.

Prior to the establishment of the network, a majority of the member agencies of the Network supported GFMD activities or served as GFMD Observers (ILO, OCHCR, UNHCR, UNDP, UNICEF, IFAD, etc.) Over the years, these UN agencies have provided valuable technical inputs to the GFMD process, including in drafting the Roundtable background papers, providing speakers, submitting relevant entries to the Platform for Partnerships database, and co-organizing GFMD activities and/or side events.

Building on GFMD’s close working relationship with UN entities dealing with migration and development, particularly IOM, the GFMD is poised to coordinate closely with the UN Network on Migration (and its member UN entities) to promote thematic synergy and coherent work planning.   While in the past, the primary connection between the GFMD and the UN was through the UN Secretary General’s Special Representative for International Migration (SRSG), it will now be through the UN Network.

The Worklplan of the UN Network can be accessed on this page. 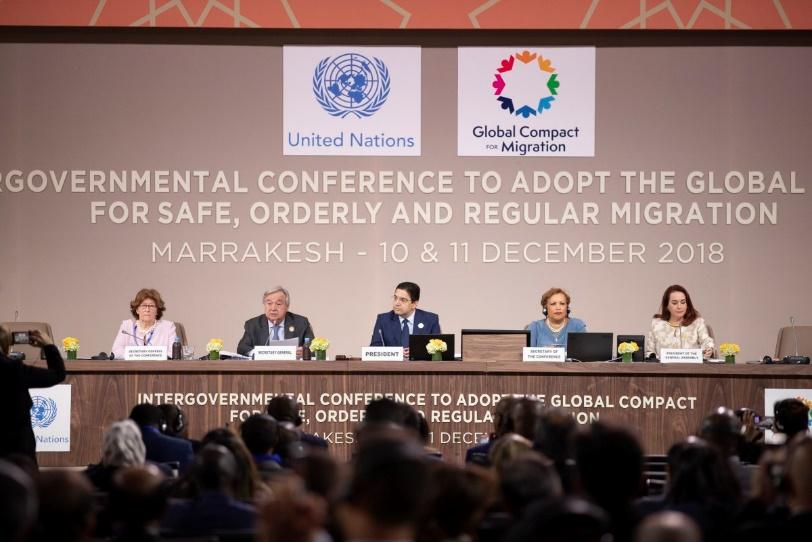 The GCM (OP 43) calls for the creation of a capacity building mechanism (CBM) to contribute, on a voluntary basis, technical, financial and human resources in order to strengthen capacities and foster multi-partner cooperation in pursuit of GCM implementation. Managing this mechanism will be part of the Network’s tasks.

The CBM will consist of:

The GFMD, as a repository for knowledge and good practices from around the world on the subject of migration and development, will thus be an important contributor to this Capacity Building Mechanism. Particularly, the GFMD Platform for Partnerships (PfP), as mentioned in the GCM (OP 43c), can serve as an open data source of initiatives on migration and development that could inform the development of a UN capacity building mechanism.

An additional building block for the CGM which could be provided by the GFMD is the proposed GFMD Marketplace. In 2019, the GFMD Ecuador Chairmanship put forward a draft concept to create a GFMD ‘Marketplace’, which, building on the Platform for Partnerships, would provide a matchmaking mechanism for States facing specific policy and practice issues and those providing targeted solutions (other governments, international organizations, foundations, civil society or private sector). This Marketplace could provide a key mechanism for cooperation and capacity building, feeding into the CBM, which facilitates implementation of the GCM.