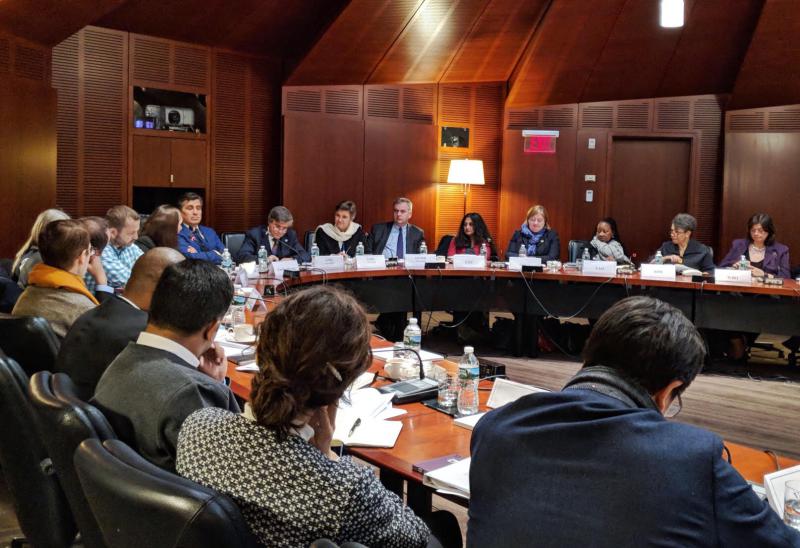 The GMG retreat discussed strategic priorities for 2018, notably on how to support the process leading to the conclusion and adoption of the Global Compact for Migration (GCM), as well as on how to assist Member States in the implementation of the GCM commitments. Of key concern was the establishment of a coordinated platform involving all concerned UN entities in order to present the "voice of the UN" and provide UN system-wide support on migration issues.

As a key partner of the GFMD process, the GMG has accompanied the GFMD and offered valuable technical and strategic inputs which helped sustain the GFMD process from one Chairmanship to the next. Ambassador Schulz articulated the potential avenues and synergies of GMG and GFMD collaboration. At the principals' level, the GFMD Chair could be invited to the GMG Principals' meetings to discuss the GFMD Co-Chair's priorities and GMG's potential contribution. At the technical level, Schulz suggested that the GFMD Co-Chairs' task force and/or the Support Unit could be invited to meetings and conferences to coordinate the respective work programs and calendar of the GFMD and the GMG. On a similar note, the concerned expert GMG agencies could also provide GFMD with technical inputs while gaining visibility through the activities of the GFMD.

Furthermore, Ambassador Schulz also emphasized the potential for the GFMD to serve as a platform to facilitate, along with the GMG, the implementation of the GCM commitments. Specifically, the GFMD could provide a platform of operational partnerships between two or more Member States, which could be achieved by thematically linking the mechanisms of the GFMD closer to the commitments in the 2030 Agenda and the GCM.

In their separate statements during the GMG retreat, Mr. Kostas Stamoulis, Assistant Director General of the Economic and Social Development Department at the FAO and Ambassador Juan José Gomez Camacho, Mexican Co-Facilitator of the GCM, also lauded the GFMD for continuously providing a multi-stakeholder platform to advance migration and development in the global agenda. Mr. Stamoulis articulated that the useful role of the GFMD in harnessing expertise on migration issues in the last 10 years has been a centerpiece of the GMG's outreach strategy.

Speaking on behalf of the Mexican GCM Co-Facilitator, Ambassador Camacho emphasized that the GFMD is critical to capture the multidimensional approach to migration issues. As migration is a complex and political phenomenon, it can only be fully understood through a 360-degree approach. This involves understanding migration from the local, national, regional, and global level, as well as investigating specific processes, such as the nexus between migration and rural development.

In conclusion Ambassador Schulz complimented the GMG Co-Chairs, IOM and FAO, for inviting the GFMD Co-Chairs to the retreat, as it offered a good opportunity for a more strategic reflection on both opportunities and challenges presented by the GCM process. He gave assurance that the GFMD Co-Chairs will lend their full cooperation towards achieving common objectives and undertaking joint initiatives, thereby signaling to the international community a strong sense of partnership between the GMG and GFMD.

As part of the continued collaboration, a joint GFMD-GMG Side Event on Migration and Rural Development will be organized on the margins of IOM's International Dialogue on Migration (IDM) on March 26. The side event will highlight the complex relationship between migration and agriculture and rural development, as well as share and promote successful experiences in harnessing the development potential of rural migration.