The relationship between the GFMD and the United Nations System

The GFMD, originally conceived of during the 2006 UN High-Level Dialogue, has submitted the GFMD Reports of Chairmanship to the UN each year through the UN Secretary-General (UNSG). Additionally, the UNSG has also attended and delivered statements in a number of GFMD Summits.

On these important occasions, the UNSG expressed support for the GFMD. For instance, in 2010 the Report of the UN General Assembly at its 65th session (A/65/203), the former UNSG Ban Ki-moon recognized that "the meetings of the Global Forum on Migration and Development have successfully engaged both Governments and the multilateral system in realizing the benefits of international migration for development and in collaborating to address its potentially detrimental effects." This sentiment was reaffirmed again, inter alia, in 2012 at the 67th session of the UN General Assembly (A/67/254). 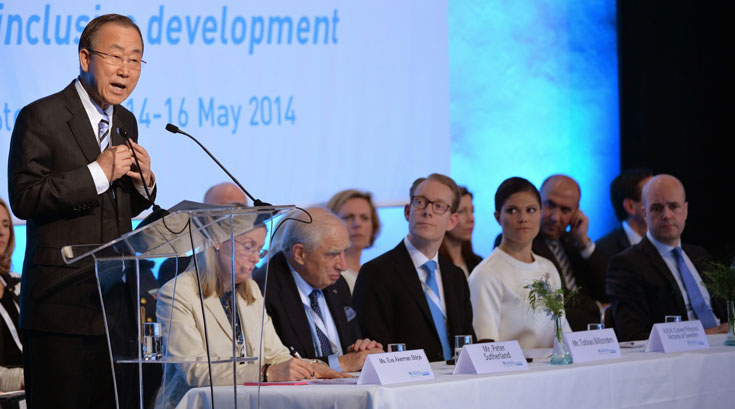 From 2007 to 2018, the GFMD’s strong link with the United Nations was maintained through the Office of the Special Representative of the Secretary General on International Migration and Development (SRSG) (Mr. Peter Sutherland, 2006-2016 SRSG, and Ms. Louise Arbour, 2017-2018 SRSG). The SRSG provided conceptual, political and policy advice to the rotating GFMD Chairs-in-Office and the GFMD Troika, and participated in preparatory activities and Summit Meetings.  Another critical link was through the Global Migration Group (GMG), an inter-agency group which aimed to promote the wider application of all relevant regional and international instruments for a better coordinated approach to international migration.

However, with the adoption and formal endorsement of the Global Compact for Safe, Orderly and Regular Migration (GCM) in December 2018, the GMG has been replaced by the newly founded UN Migration Network, which aims to provide a UN system-wide coherent approach to migration. It is hoped that the UN Network, like the GMG, will extend to the Forum valuable technical support -- collectively or through individual member agencies -- thereby fortifying the GFMD’s link with the UN System.

For more information on the relationship of the GFMD with the UN and its agencies, please see: