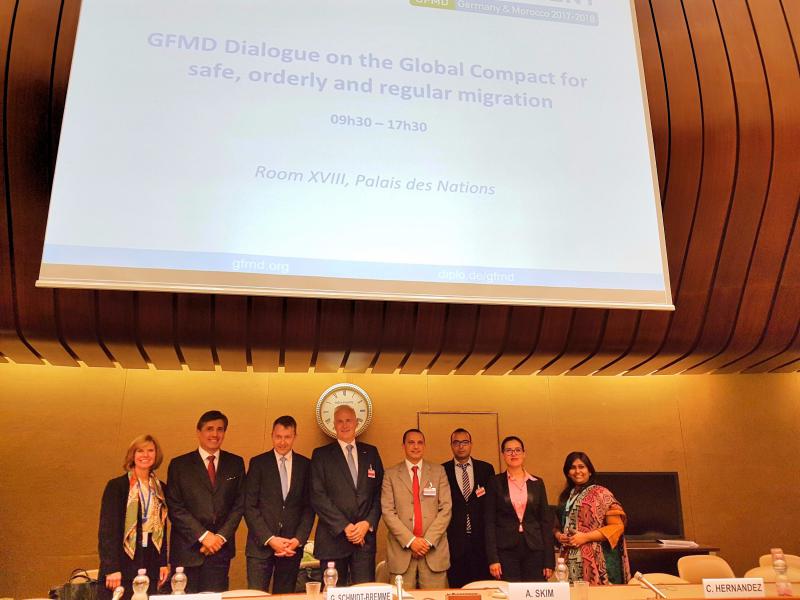 6 April 2017, Geneva - The second GFMD Dialogue on the Global Compact for safe, orderly and regular migration (GCM) took place on April 6 and gathered over 180 representatives from member states, GFMD observers, civil society and private sector. The Dialogue substantiated the envisaged GFMD inputs to the scheduled stock-taking exercise for the Global Compact, to be held in Mexico in late November 2017.

During the opening plenary, the two GCM co-facilitators, Ambassador Gomez Camacho of Mexico and Ambassador Jürg Lauber of Switzerland, gave an update on the Modalities Resolution, which was subsequently adopted later in the day by the UN General Assembly in New York. Ambassador Lauber announced that the first thematic session is scheduled on 8-9 May in Geneva. He called for a transparent and inclusive approach in the coming months leading to the stock-taking exercise in Mexico in November 2017. Ambassador Camacho, who chaired the GFMD in 2010, emphasized that the GFMD has played a crucial role over the past 10 years as a unique mechanism for a dialogue and cooperation on migration with all concerned stakeholders. He pointed to the immense opportunity presented by the GCM process, which may not happen again. In this regard, he highlighted  the enormous responsibility shared by the international community to seize this unique opportunity. He urged for pragmatic and practical deliverables that could be followed-up and monitored after the adoption of the Global Compact.

Ambassador Swing, IOM Director General shared the organization’s perspectives on the GCM and reaffirmed its state ownership and the assurance of IOM’s substantive support to the GCM process.

UNDESA Under-Secretary General Wu Hongbo, via a video message, imparted four main ideas on the GCM Process: the Compact should encourage countries to establish well-managed policies, to advocate for the human rights of all migrants, to recognize migration as an enabler of sustainable development and to set up a strong implementation mechanism.

The dialogue was comprised of three working sessions, covering GCM Thematic Clusters 1, 4, and 6, which focus on the human rights of all migrants, contribution of migrants and diasporas and irregular migration and regular pathways, respectively.

The main outcomes of the discussions were summarized by the assigned working session rapporteurs during the closing plenary.

Ambassador Mehmet Samsar, Turkey’s Director General for Consular Affairs, chaired the session, with Mr. William Gois of Migrants’ Forum in Asia and Ambassador Rosemary McCarney, Permanent Representative of Canada to the UNOG as input speakers.  As reported by Ms. Carolina Hernandez of the OHCHR, participants underlined the positive and empowering experience for individuals and communities on the move, but emphasized that ensuring the protection of human rights of migrants along migratory routes is a shared global responsibility. In line with the commitments of the New York Declaration to protect the human right of all migrants, the Global Compact should strive to foster a far more comprehensive human-rights and gender-sensitive approach to migration. To address the rising xenophobia and discrimination, multi-stakeholder partnerships and cooperation at all levels, from local to national and regional authorities, is an imperative. The session also emphasized that there is no need to reinvent the wheel, but the international community needs to work together to implement the established normative and pragmatic frameworks on migrants’ rights protection. The GFMD’s role in fostering a multi-stakeholder dialogue and dialogue was hailed by participants, as well as its rich repository of good policies and practices.

The second panel was chaired by Mr. Arturo Cabrera, Deputy Permanent Representative of Ecuador to the UNOG. Mr. Yoseph Kassaye Yoseph, representing the Federal Republic of Ethiopia and Mr. David Khoudour of OECD intervened as input speakers. Mr. Pedro de Vasconcelos of IFAD reported in the closing plenary that the panel highlighted the contributions of migrants in all shapes and forms, including remittances and in-kind. The session established that remittances sent by migrants allow families to tackle serious issues of poverty, food security and health – which contribute to the achievement of the 2030 SDGs. In addition, migrant workers send only 15% of their earnings, and 85% are either spent or retained in the host country. This clearly shows migrants’ contribution in their host countries as well. The discussion highlighted the deepening reflections over a decade-long GFMD discussions on key issues concerning migrants’ contributions, including the reduction of remittance transaction fees, lowering recruitment and other migration costs, portability of benefits for migrant workers, financial inclusion and financial education for migrants. In this context, GFMD’s potential to feed substantially to the GCM process was underscored.

Ambassador Ravinatha Aryasinha, Permanent Representative of Sri Lanka to the UNOG chaired this session, with Mr. Alex Zalami, Advisor to the Minister of Labour, United Arab Emirates, Mr. Japp Buis, Randstad Holding as input speakers and with Ms. Michelle Leighton, ILO, as rapporteur. The panel reflected on the impact of changing demographics on migration and the world of work. Participants recognized that demographics is increasingly defining the future of work, and this reality should be considered in labour migration governance. There was a wide agreement that the GCM should address two specific areas: the promotion of fair and ethical recruitment and the promotion of skills mobility and recognition, thus favoring the upskilling of migrant workers. The discussion also focused on the elements of well-managed migration pathways and channels, and encouraged the establishment of more regular pathways for migrants. Participants asserted that existing governance mechanisms, including regional and bilateral agreements and frameworks, must be strengthened and sensitive to the specificities of migration corridors. They also highlighted the need to engage businesses, workers’ organizations and the migrants themselves in a holistic approach. Hereof, the GFMD could contribute to the GCM process by serving as an accessible pool of information and a database for relevant practices.