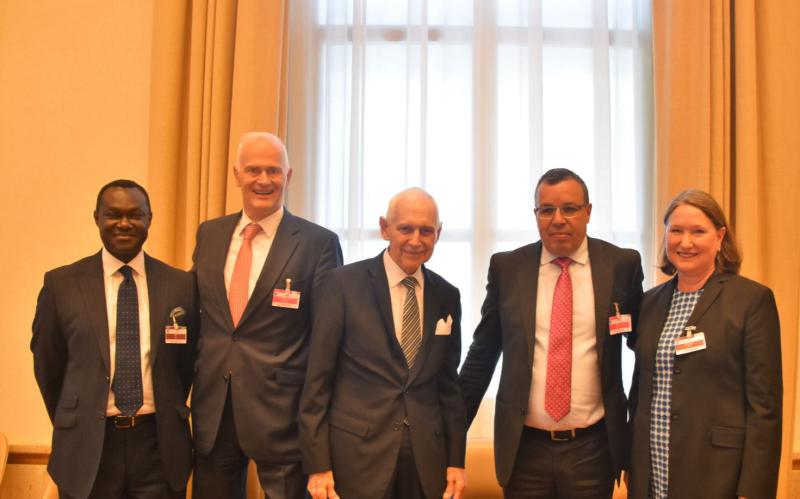 As part of GFMD’s efforts to accompany the evolving GCM process and encourage Member States to develop their perspectives on international cooperation on migration in the future, the 2017-2018 Co-Chairs, Germany and Morocco, convened a GFMD Dialogue on GCM implementation. With the successful finalization of the intergovernmental negotiations on July 13, this Dialogue provided the first opportunity for over 200 representatives from member states, GFMD observers, civil society and private sector to reflect collectively on how the GFMD could help translate the GCM commitments into action. Concretely, the Dialogue aimed to achieve the following objectives:

During the opening session, Moroccan GFMD Co-Chair, Mr. El Habib Nadir, marked the Dialogue as a timely opportunity to discuss how the GFMD could strengthen its links with the international community at large, thereby maximizing its support to GCM implementation.

IOM Director General Ambassador Swing focused his opening keynote on conceiving the Migration Week in Marrakesh as “the end of the beginning”, emphasizing the importance of maintaining the Global Compact’s momentum in strengthening international cooperation.

With a diverse panel including members of the GFMD Review Team, civil society and the Migration Laboratory, Session I focused on how to build upon GFMD’s modalities to best contribute to the UN Capacity-Building Mechanism (CBM). Panelists agreed that the GFMD – as a state-led, informal, dialogue-based Forum - should further strengthen its key characteristics. According to the preliminary results of the GFMD Review questionnaire, participating Member States value the Forum as a dialogue space for building a common understanding on relevant issues (knowledge), for thereby assisting in policy formulation (implementation), and for connecting a multiplicity of stakeholders (networking).  In this sense, GFMD’s multi-stakeholder character might prove instrumental in ensuring that Marrakech will not be an end in itself but rather the beginning of new era, as highlighted by Ambassador Hilale, Permanent Representative of Morocco to the UN in New York. Existing tools such as the Platform for Partnerships (PfP) could be leveraged and used alongside with professional dialogue methodologies to further develop the GFMD in light of GCM implementation and beyond. 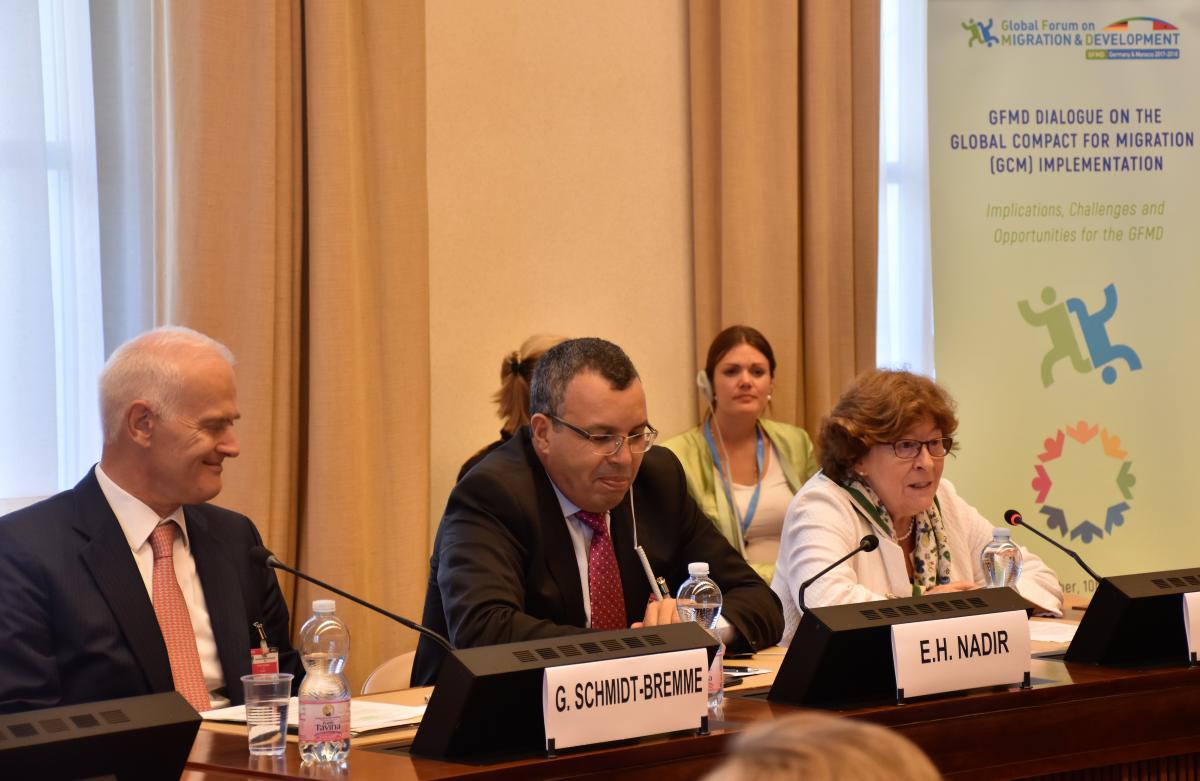 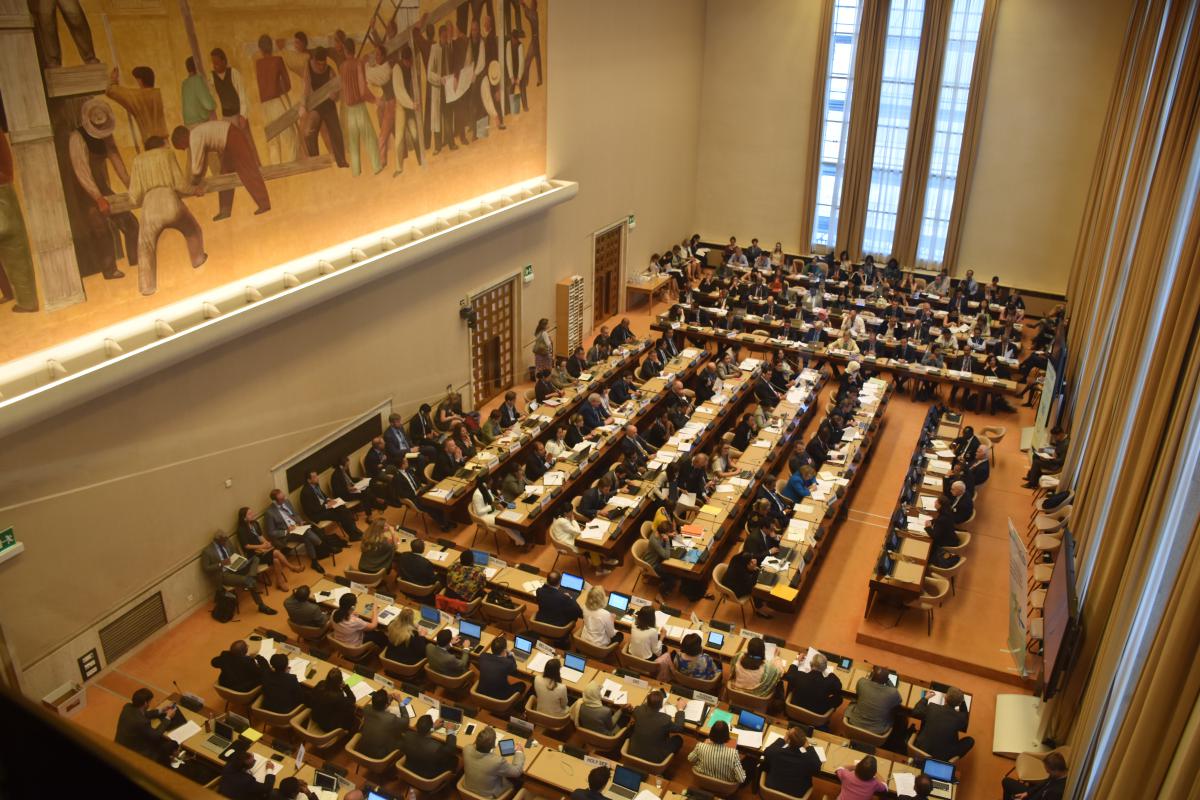 In her keynote speech, Ms. Louise Arbour, the UNSG’s Special Representative (SRSG) for International Migration and Secretary-General of the Intergovernmental Conference to Adopt the GCM, advocated for a close cooperation with the UN Migration Network, which should serve as linkage between the GFMD and the UN in the future. In particular, she suggested for the GFMD support to be focused on a few thematic issues, such as skills development or remittances, to maximize targeted policy outcomes in the short-term. Finally, the SRSG urged Member States to generate concrete, actionable ideas for Marrakesh in order to energize the Compact’s implementation right after its envisaged adoption.

With regards to maximizing synergies, Session II of the Dialogue focused on how to enhance GFMD’s institutional linkages – with the UN and beyond – to support the implementation, as well as follow up and review of the GCM. Responses to the GFMD Review questionnaire as to the Forum’s future perspectives varied, with three elements emerging: 1) informal policy dialogue, 2) data, knowledge and learning, and 3) multi-stakeholder partnerships and Projects. Mr. Alex Zalami, UAE Advisor to the Minister of Human Resources and Emiratisation, specifically stressed the importance of synergies with Regional Consultative Processes (RCPs), which could benefit from the GFMD’s acquired experiences, and vice-versa.  From the perspective of civil society as well as the private sector, the GFMD should remain a participatory and inclusive space, discussing both issues related to and beyond GCM implementation.

In closing the Dialogue, Ambassador Arturo Cabrera, representing Ecuador as incoming chair for 2019, advocated for closer cooperation by the GFMD with the UN network and for leveraging existing GFMD mechanisms to ensure a systematic alignment with the GCM agenda. Ms. Eva Åkerman Börje, Senior Policy Advisor at the Office of the SRSG, encouraged all participants to recognize the GCM’s implementation as an era of grit, requiring long-term perseverance and strategic thinking at multiple levels. With specific regard to the GFMD, she advocated for an incremental stabilization of the process, both in terms of resources and structures. Ms. Michele Klein Solomon, Director for the GCM at the International Organization for Migration, equally encouraged the GFMD to further develop in identifying the whole spectrum of practices and lessons learned in a state-led and inclusive manner. Mr. Lars Hartenstein, Associate Principal at McKinsey & Company, shared about an ongoing project aimed at fostering a fact based, largely economic perspective on the benefits of implementing the GCM, while also shedding light on the costs of non-action. Member States were expressively invited to champion this initiative as a forward-looking input to Marrakesh and beyond.

Finally, Ambassador Götz Schmidt-Bremme, German GFMD Co-Chair, re-emphasized the GFMD’s nature as a safe space, a laboratory to openly address controversial topics and provide for a realistic perspective on migration.