GFMD consolidates inputs to the GCM 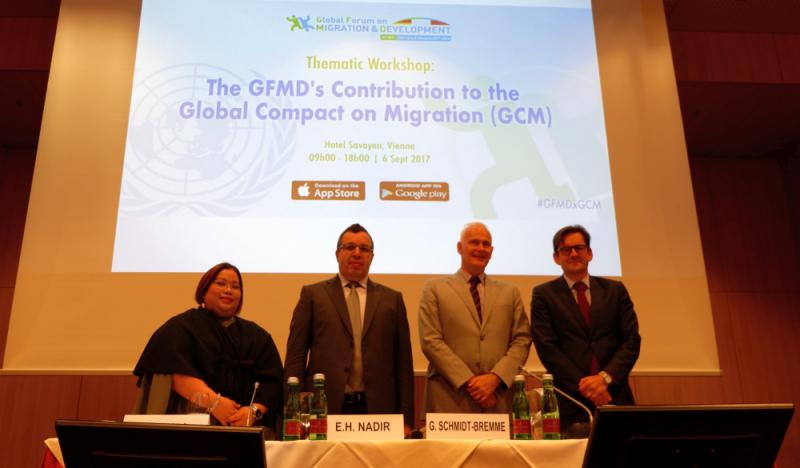 6 September, Vienna — The German-Moroccan GFMD Co-Chairmanship in cooperation with the Governments of Philippines and Sweden held a stock-taking thematic workshop on the “GFMD’s Contribution to the Global Compact on Migration (GCM).” The event saw the participation of more than 140 policymakers and practitioners in the field of international migration, representing 70 UN Member States and international organizations, civil society and the private sector.

The event was organized to consult with the GFMD Friends of the Forum on the key elements of the draft report containing GFMD’s inputs to the GCM, drawn from the main recommendations of past GFMD Summit meetings. Another objective was to identify potential action areas for the GFMD in the GCM, based on its acquired decade-long and extensive expertise.

The opening of the workshop was led by Dr. Götz Schmidt-Bremme, German GFMD Ambassador who informed the Forum about the state of GFMD’s draft contribution to the GCM and the next steps planned under the current Co-chairmanship. He reminded the participants that the Berlin Summit discussions upheld the value of the GFMD as an informal platform for open and constructive dialogue between governments and other stakeholders and that it should play an instrumental role in the context of the GCM process. There was also a consensus in Berlin to safeguard and further develop the GFMD’s essential characteristics.

Representing the Philippines as co-convener, Ms. Sarah Lou Arriola, Undersecretary of the Office of Migrant Workers Affairs at the Department of Foreign Affairs (DFA), imparted her country’s insights on the constantly evolving landscape of migration. The Philippine’s engagement with the GFMD, she said, has allowed mainstreaming of migration into medium-term and long-term development plans at both national and local levels. For his part, Mr. Ola Henrikson, Director General for Migration and Asylum at the Ministry of Justice, challenged the participants to articulate what operational framework would be needed for the GCM to deliver on the international commitments made and to facilitate good practices on promoting safe, orderly and regular migration.

In her video message, UN SRSG Ms. Louise Arbour urged the GFMD to focus on concrete and actionable outcomes for the GCM and called on the states to strive for a Global Compact with real deliverables.

After the opening plenary, simultaneous working sessions were organized around the six GCM thematic clusters, as defined in the Modalities Resolution. Each session was chaired by a high-level government official. A GCM Rapporteur presented the main elements on the relevant topic, which were excerpted from the draft GFMD contribution. Delegates reflected on some guiding questions, e.g., how the GCM can facilitate sustainable implementation of commitments in  international standards and frameworks; how can the GCM further advance relevant recommendations and good practices shared within the GFMD, and which current challenges, if any, require specific emphasis by the GCM?

Below highlights the main points of convergence, recommendations and challenges that emerged from the deliberations, as reported by expert thematic rapporteurs during the closing session:

In concluding the thematic workshop, Mr. El Habib Nadir, Secretary General of the Ministry in Charge of Moroccans Living Abroad and Migration Affairs, laid out four essential elements that require particular attention: (1) human rights should be at the heart of any migration governance; (2) focus should be on vulnerable migrants such as women and youth; (3) efforts must be strengthened to achieve the SDGs in the 2030 Agenda; and (4) follow-up and tracking mechanisms should be put in place to give the Global Compact an added value. He affirmed that the Global Compact presents us an opportunity to address these challenges and establish a global vision for human mobility—and that the GFMD has played and, under Morocco’s leadership, will continue to play a critical role in this context.

The outcomes of the recently concluded GFMD Thematic Workshop will be integrated to the final report which will be shared with the GFMD Steering Group and Friends of the Forum for endorsement in November 2017. After which, the report will be handed over to the GCM co-facilitators and the UN SRSG Ms. Louise Arbour ahead of the stocktaking conference in Puerto Vallarta, Mexico in December 2017.