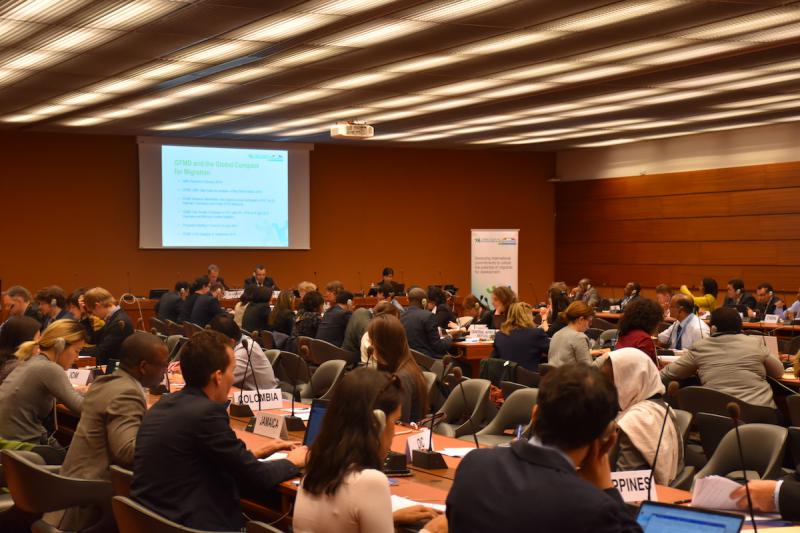 4 May 2018, Geneva –The Moroccan and German GFMD Co-Chairs convened the sixth GFMD preparatory meetings and second Roundtable (RT) consultations on May 2 and 4, respectively, at the Palais des Nations in Geneva. The meetings of the Troika, Steering Group and the Friends of the Forum on May 2 provided an opportunity to inform the Geneva community about the current state of the inter-governmental negotiations on the Global Compact for Migration (GCM), while the second GFMD 2018 RT consultations on May 4 offered a space for RT members to agree on the structure and content of the background paper.

2 May 2018 – Preparatory Meetings of the GFMD Troika, Steering Group (SG) and the Friends of the Forum (FOF)

Mr. El Habib Nadir, GFMD Moroccan Co-Chair and Mr. Sönke Lorenz, representative of the German Co-Chair, led the successive discussions of the GFMD Troika, the Steering Group and the Friends of the Forum on May 2.

A common objective of the meetings was to discuss the progress made since the last preparatory meetings in February and to introduce the forthcoming activities of the GFMD in 2018. A special focus was on the state of play of the GCM inter-governmental negotiations, the fourth round of which was scheduled on 14-18 May in New York. Mr. Nadir particularly expressed his appreciation for the role ascribed to the GFMD in the latest draft, especially the invitation for the GFMD to be involved in the implementation, follow-up and review of the Global Compact.

In both SG and FOF meetings, the Co-Chairs also reported on the highlights and outcomes of recent GFMD activities, which related both to the GCM Process and the 2030 Agenda. In particular the conclusions of the Skhirat Thematic Workshop on “Migration for Development: a roadmap to achieving the SDGs” were shared with the audience, as well as the main conclusions of the “GFMD Recommendations to the 2018 HLPF” - a report submitted to the President of the ECOSOC, which constitutes the GFMD’s substantive contribution to the 2018 High level Political Forum.

Two more thematic workshops – on Labour Migration and Skills (4 May, Geneva) and on Children and Youth on the Move (21-22 June, Agadir), a Special Meeting with the GCM Co-Facilitators  (19 June, Geneva), and a GFMD side event (13 July, New York) are upcoming, to be followed by the last round of GFMD preparatory meetings, a GFMD Dialogue on the GCM implementation, and the final RT consultations on 3, 4 and 5 September, respectively, in Geneva.

The Co-Chairs further signaled the launch of the GFMD ten-year review to help inform the Future of the Forum session at the Eleventh Summit in Marrakesh. Representing the group of experts mandated to lead this exercise, Dr. Steffen Angenendt explained that the review aims to analyze and evaluate the GFMD’s contribution to the global dialogue on migration and development. For this purpose, a questionnaire will be sent to Member States in order to get their insights on the GFMD’s added value and on future perspectives. In addition, the GFMD would consult with its key partners – the Global Migration Group (GMG), the civil society and the private sector.

Each Roundtable Co-chairs also gave an update to the Steering Group and the Friends of the Forum on the status of preparation of their respective RTs (see more below). Finally, the Moroccan Co-Chair presented some initial organizational aspects regarding the Eleventh GFMD Summit in Marrakesh (5 to 7 December), which will kick off the Migration Week (5 to 11 December) that culminates in the inter-governmental conference (10-11 December) on the adoption of the Global Compact.

Finally, brief discussions during the meetings also covered the 2018 budget, the respective work stream and budgets of the GFMD Civil Society and the GFMD Business Mechanism, and recent developments in the ad hoc Working Group on Communications.

Six thematic RT consultations were held on Friday, May 4, around the GFMD Co-Chair’s thematic priorities for 2018. Around 55 governments and 17 organizations took part in the second RT consultations round led by respective RT Co-Chairs. The discussions focused on the draft background papers and possible format of the RT session in Marrakesh, drawing comments and inputs from RT team members, and agreeing on next preparatory steps.

Below provides a snapshot of RT session key elements.

Theme 1: From vulnerability to resilience: recognizing migrants as agents of development