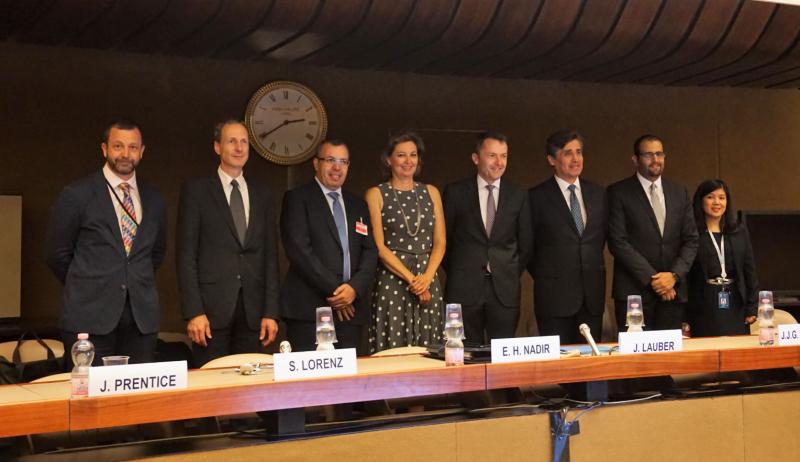 The Global Forum on Migration and Development (GFMD) 2017-2018 proved once again its commitment to the Global Compact for Migration (GCM) process by hosting a special meeting on 19 June with the GCM Co-Facilitators, Ambassador Jürg Lauber (Switzerland) and Ambassador Juan José Gómez Camacho (Mexico) in Geneva. The meeting was also attended by Mr. Jonathan Prentice, who represented the Office of the UN SRSG for International Migration.

Co-convened by the German and Moroccan GFMD Co-Chairs, the special meeting aimed to update Geneva-based GFMD stakeholders on the status of the GCM intergovernmental negotiations in New York and encourage Member States’ reflection on how the GFMD can support the implementation, follow-up and review of the Global Compact after its adoption in December 2018. It attracted the participation of some 150 policymakers and practitioners in the field of international migration, comprised of UN Member States, GFMD Observers, civil society and the private sector.

Ambassador Lauber affirmed the important contributions of the GFMD to the GCM process by saying that the migration community would not be where it is today without the Global Forum’s contribution. The GFMD has provided a safe space for the exchange of perspectives and best practices, as well as innovative approaches among different stakeholders. He shared that the GCM conversations have been very dynamic and there has been an increased understanding of concepts. The GCM draft, he said, should be read as a “comprehensive document” that includes specific practical measures to help Member States improve the management of international migration.  On the other hand, Ambassador Camacho underlined that the Global Compact’s most powerful element is the buy-in from all participating Member States. In this sense, the Compact will become the “spine of the global debate on migration”. As for the GCM follow-up and review, the Co-Facilitators shared their vision of repurposing the UN system in order to make it more dynamic and innovative in fostering cooperation among countries.

Mr. Prentice explained the elements of the UN Migration Network which is envisaged in the Global Compact. He was optimistic that the adoption of the GCM will be a great opportunity to bring the GFMD and the UN system closer together to reach common goals and objectives. 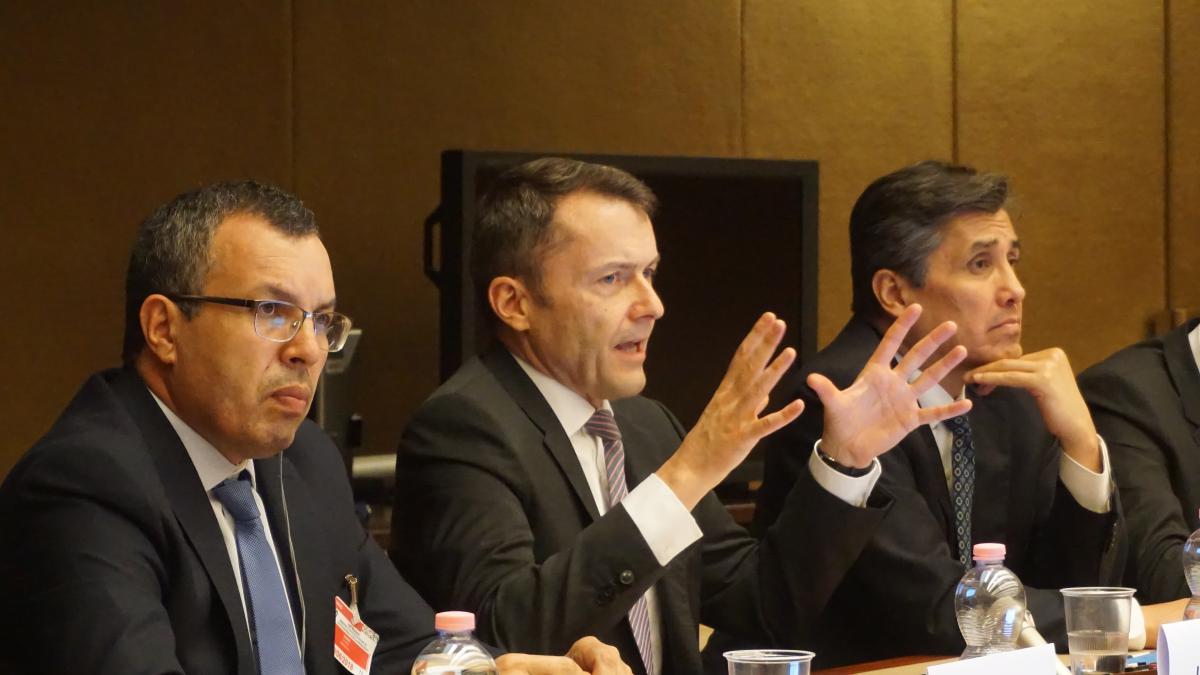 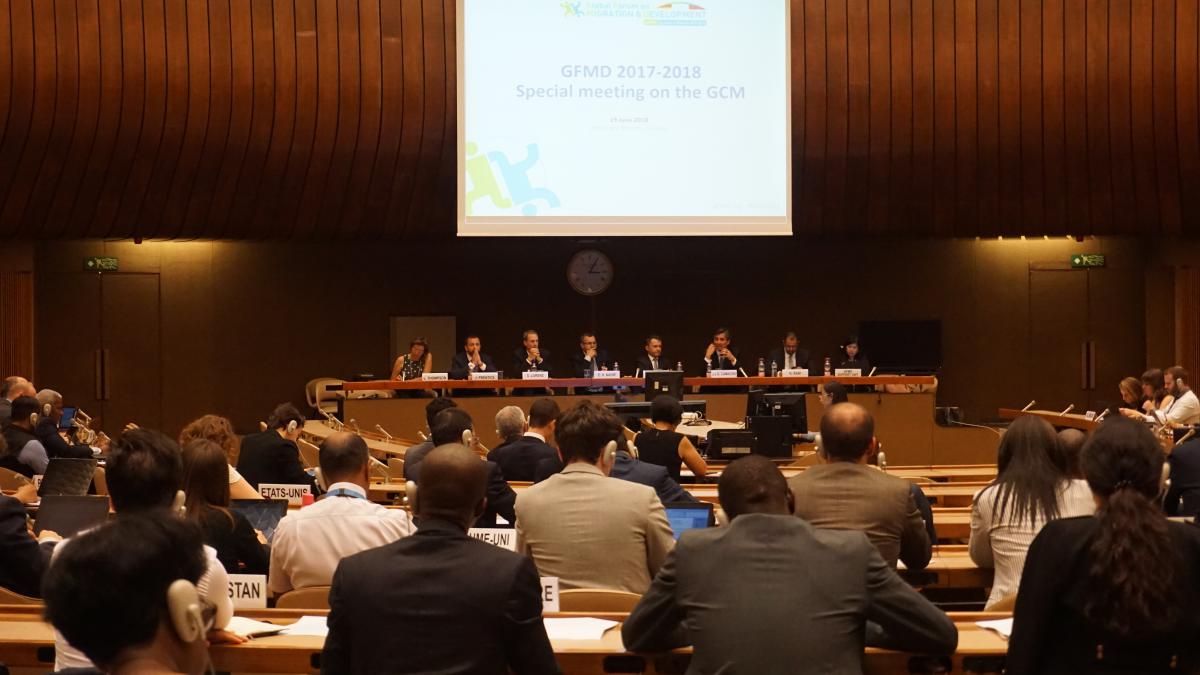 Mr. El Habib Nadir, Moroccan GFMD Co-Chair, reflected on the role of the GFMD, which he said has been instrumental in paving the way for recent advances in international cooperation on migration and development – including the Global Compact. In looking ahead after the GCM adoption, Mr. Nadir proposed some of the ways that the GFMD can promote dialogue and action, such as by building bridges between its Platform for Partnership (PfP) and the objectives stated in the Compact and by providing the space to establish and support follow-up projects. Further to this reflection, Mr. Nadir announced that a Ten-Year GFMD Review is underway to assess the GFMD’s added value in the last decade, and consider how to further strengthen and enhance the GFMD process.

For his part, the German GFMD Co-Chair, represented by Mr. Sönke Lorenz, welcomed the inclusion in the latest GCM draft (dated 28 May 2018) of the GFMD Platform for Partnerships (PfP) as a source of online wealth of information in the proposed UN capacity building mechanism for the GCM implementation (see OP 42).

IOM’s Deputy Director General Ambassador Laura Thompson focused her remarks on the perspective of the IOM – with regard to its new role as coordinator and secretariat of the UN migration network – and how the GFMD can work in complementarity with IOM to support the Member States’ implementation, follow-up and review of the GCM. She proposed that the firewall between the GFMD Support Unit (SU) and IOM be removed in order to better facilitate its substantive and logistical support to the Global Forum. Ambassador Thompson also proposed to strengthen synergies between the GFMD and IOM’s International Dialogue on Migration (IDM) to foster continued and more productive dialogue among Member States and common stakeholders (see OP 46 of the GCM Rev Two).

During the open discussion, participants welcomed the latest GCM draft which included new and strengthened references to the GFMD. Participants also called for a closer and more transparent relationship between the IOM and GFMD while preserving and possibly strengthening the Forum’s unique character as an informal, non-binding and voluntary process on migration and development. They envisioned that this closer synergy would facilitate seamless coordination across levels of policymakers at the national, regional and global levels.

Towards the end of the meeting, Mr. Omar Rabi, Counselor at the Permanent Mission of Morocco to the UN in New York, presented the preliminary logistics for “Migration Week” to be held in Marrakesh on 5 to 11 December 2018.