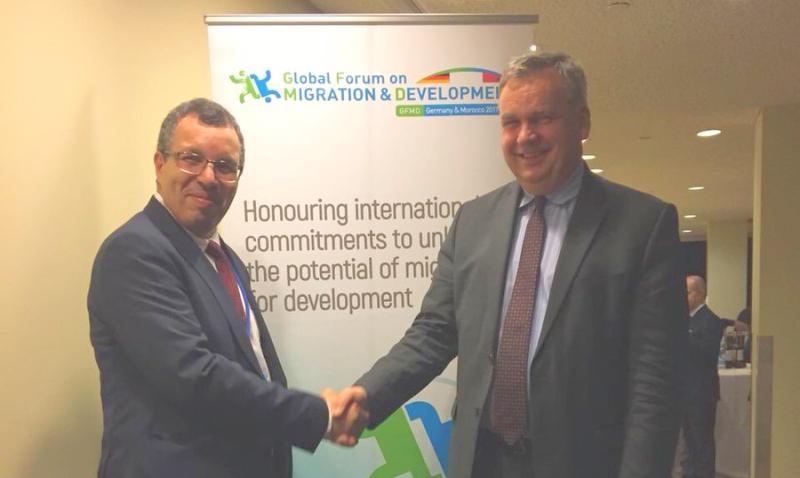 15 February, New York—On the margins of the 16th Coordination Meeting on International Migration, organized by UNDESA at the United Nations Headquarters, the Global Forum on Migration and Development (GFMD) 2017-2018 Co-Chairmanship of Morocco and Germany hosted a reception to mark the launch of the GFMD 2018 thematic priorities and work program.


The reception capped a full day of discussions and reflections on the progress made in terms of substantive preparations for the Global Compact and the implementation of the migration-related commitments of the 2030 Agenda.

The event, which was organized in collaboration with the Permanent Missions of Germany and Morocco, saw the participation of over 100 representatives from governments, civil society and the private sector and other relevant stakeholders.


As the Co-Chairmanship entered its second year, the reception served as an occasion for the Co-Chairs to interact with members of the New York community and exchange perspectives towards enhancing partnerships and international cooperation on migration and development. Under the overarching theme, “Honouring international commitments to unlock the potential of migrants for development,” the Co-Chairmanship’s focus remains on strengthening the GFMD’s inter-linkages with relevant UN-led processes, notably the 2030 Agenda for Sustainable Development and the Global Compact for Migration (GCM), as well as building upon the outcomes of the GFMD Summit Meeting in Berlin in June 2017.


After welcoming guests, Ambassador Omar Hilale, Permanent Representative to the UN in New York, reflected on Morocco’s role as both GFMD 2017-2018 Co-Chair and host of the forthcoming GCM Intergovernmental Conference. “It is a privilege for Morocco, honour for Morocco, but at the same time a very heavy responsibility,” he said, “but I can assure you that we will take on the challenge.” He then congratulated Germany for a successful 10th GFMD Summit Meeting in Berlin and shared his optimism that the 11th GFMD Summit Meeting in Marrakesh to be held on 5-7 December – a few days ahead of the GCM Intergovernmental Conference on 10-11 December – will be a cornerstone in the work of the UN in favour of migration.


For his part, Ambassador Jürgen Schulz, GFMD German Co-Chair representative, articulated his vision that together, the GFMD and the global community will make the year 2018 a success as the Global Compact is truly a historic challenge for all relevant stakeholders to ensure that migration takes place in a safe, orderly and regular manner. With a view to the GFMD process, he shared that it “has the beauty of many stakeholders discussing migration issues,” thus making it particularly relevant.

In his closing remarks, Mr. El Habib Nadir, GFMD Moroccan Co-Chair, thanked the guests and expressed his deepest gratitude to Ambassador Schmidt-Bremme, GFMD German Co-Chair, for their close collaboration in leading the GFMD 2017-2018 Co-Chairmanship. He then outlined the GFMD 2018 preparatory activities leading to the Marrakesh Summit in December and shared his enthusiasm for the GFMD in 2018 as the global community commits to strengthen the international frameworks on migration and development.