GFMD Perspective on Migration for Sustainable and Resilient Societies 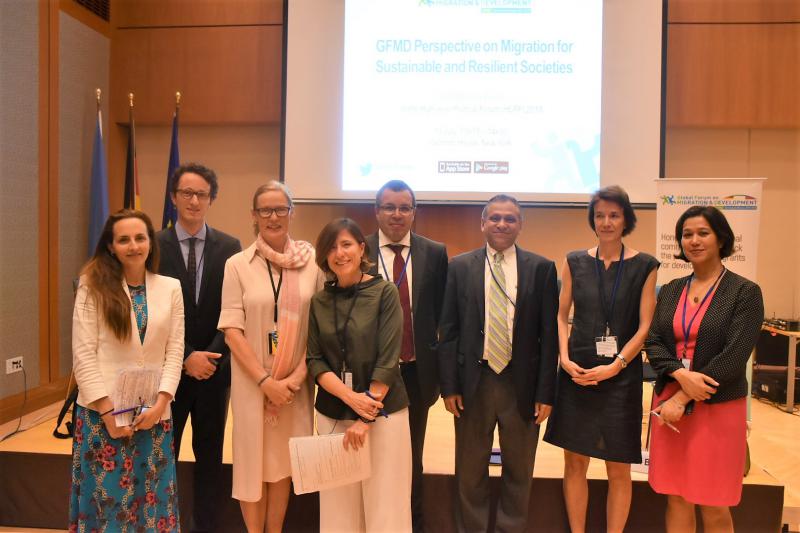 New York – With the development and migration communities gathering in New York for the last round of GCM negotiations and the 2018 High-level Political Forum (HLPF), respectively, the GFMD Co-Chairs organized an HLPF Side Event on “GFMD Perspective on Migration for Sustainable and Resilient Societies” at the German House. Attended by more than 100 participants, the side event was held to share and reflect on the findings of the GFMD Recommendations to the 2018 HLPF, which had been submitted to the ECOSOC in April. The report analyzes the interlinkages between the SDGs in focus of this year’s HLPF (i.e. Goals 6, 7, 11, 12, 15 and 17) and migration, and explores the explicit and implicit references to migration in the 2030 Agenda more generally.

With the GCM negotiations just having been concluded successfully, the side event provided a timely opportunity to give an outlook on how the Global Compact may serve as a vehicle for enhancing cooperation at the different levels of interaction, be it multilateral, regional, national or local.

In welcoming participants, GFMD Moroccan Co-Chair Mr. El Habib Nadir, focused on Morocco’s national experience in implementing the SDGs in focus, more specifically with regards to investments in improving access to drinking water, sanitation and electricity and the corresponding contribution of migrants and diaspora. In particular in rural areas, migrants have contributed to improving access to drinking water and electricity networks, thereby becoming agents of development. Due to their success, such local programmes were subsequently followed up on the national level, for instance in relation to access to education.

In view of the successful conclusion of GCM negotiations, Ms. Eva Akerman-Börje, Senior Policy Advisor at the OSRSG, focused her intervention on the momentum built at the global level. With the GCM constituting a robust framework for cooperation, she emphasized that the agreed outcome marked the beginning of implementation. It is in this context that the GFMD will continue to play a critical role, especially with regards to linking migration and development. These linkages will also prove critical when it comes to reviewing the GCM and the Agenda 2030.

Moderated by Ms. Marta Foresti, Managing Director of the ODI, the panel offered insights from a broad range of stakeholders, including UNDP, the World Bank and Open Society Foundations. First, Ms. Charu Bist, Senior Jobs and Livelihoods Advisor at UNDP, shared the organization’s perspectives on the nexus between migration and development, highlighting the different linkages within the SDG framework in promoting resilient societies. Focusing his intervention on analyzing climate-induced migration from an economic perspective, Mr. Dilip Ratha, lead economist at the World Bank’s KNOMAD, provided thought-provoking insights on the future development of migration as a global reality as well as on the adverse effects of climate change and on the role of diaspora in this regard.  Mr. Julian Pfäfflin, Senior Policy Officer for International Migration at the German Federal Ministry of Economic Cooperation and Development, shared his perspective from Germany as a donor country, outlining how the GCM will challenge the development ministries in the framing of their strategy.

Ms. Collen Thouez, Director of Open Society Foundations, highlighted the critical role of cities in promoting resilient societies, for instance by specifically including migrants in their resilience and urban planning but also by being increasingly active in climate diplomacy. 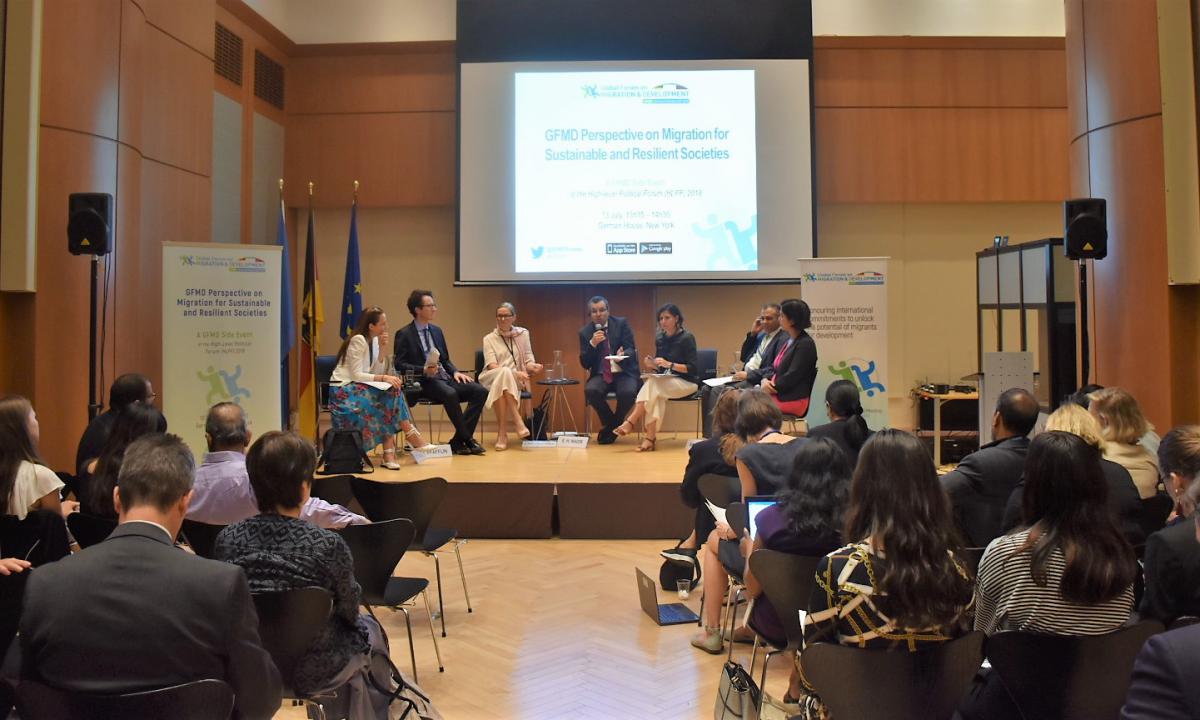 The following key points emerged from the panel as well as from the discussion with participants:

In conclusion, Ms. Akerman-Börje highlighted the manifold opportunities offered by the GCM in terms of strengthening international cooperation. For his part, Mr. Nadir encouraged participants to further concretize discussions on the GCM’s implementation in Marrakesh and pointed to the upcoming GFMD Dialogue on GCM Implementation, to be organized in Geneva on September 4. Finally, Ms. Karin Goebel, Head of Economic Department at the German Permanent Mission to the UN in New York, concluded that the GFMD should continue to serve as a catalyst for multi-stakeholder partnerships, thereby further enriching the dialogue on migration-related SDGs.