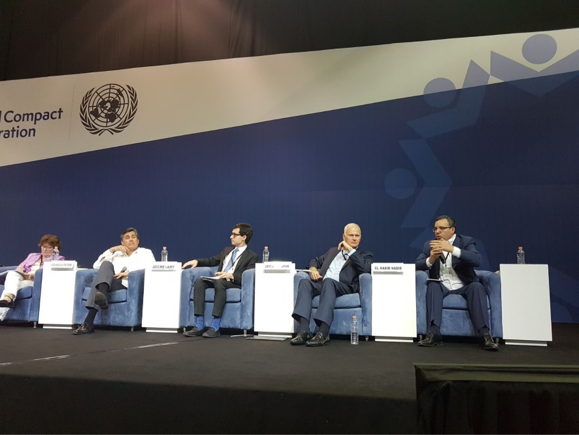 4 December, Puerto Vallarta—On the first day of the Global Compact for Migration (GCM) stocktaking conference, the GFMD Co-Chairs officially handed over the GFMD Thematic Recollection (2017-2017) to the GCM Co-Facilitators, Amb. Juan José Gómez Camacho, Permanent Representative of Mexico to the UN in New York and Amb. Jürg Lauber, Permanent Representative of Switzerland to the UN in New York as well as to the UN SRSG for International Migration, Ms. Louise Arbour, in her capacity as Secretary General of the intergovernmental conference to adopt a GCM by end 2018.

Speaking at the “Retrospection” session of the conference, Amb. Götz Schmidt-Bremme, German GFMD Co-Chair, pointed out that the 54-page thematic recollection constitutes the Global Forum’s contribution to the GCM process, and reflects the diversity of decade-long discussions that have taken place in the context of the GFMD. Consistent with the GFMD’s character as a state-led but not state-only process on migration and development, the document has benefitted from the valuable inputs not only of governments, but also international organizations, GFMD Observers, the civil society and the private sector.

Representing the Moroccan GFMD Co-Chair, Mr. El Habib Nadir, emphasized that the document is a testament to the deepening of the multi-stakeholder dialogue and cooperation that the Global Forum has fostered through the years. Looking forward to the next phase of the GCM process, he highlighted the need to develop policies and frameworks that are state-led, evidence-based and inclusive of non-governmental stakeholders.

In their separate statements, the GFMD Co-Chairs stressed that the GCM process did not have to start from zero in elaborating a global compact; it could benefit from many existing policies and practices that came out of relevant platforms for dialogue and cooperation, notably the GFMD. They added that the GFMD would continue providing a valuable space for sharing views and trust-building among stakeholders as it accompanies the GCM intergovernmental negotiations and subsequently its adoption in 2018.

During the three-day stocktaking, member states as well as non-government participants attributed a number of important references and recommendations to the GFMD. On December 6 at the “Follow up and Implementation” session, participants proposed to utilize the GFMD as a platform for implementation and innovation, as well as to promote emerging issues and those not included in the GCM. They also urged to consider the GFMD as a repository for best practices and as platform for dialogue, while maintaining its informal character which paves the way for the inclusion of, and partnerships with other actors. With regards to the follow-up and review mechanism of the GCM, participants recommended the GFMD “to elaborate annual reports that could feed into the GCM review.”

In the concluding session, Ms. Kathleen Newland, Senior Fellow and Co-Founder of the Migration Policy Institute (MPI), articulated that the most practical arrangement for the GCM implementation may be through a series of “coalitions” among origin, transit and destination states, along with various stakeholders—an approach called “mini-multilateralism.” She held the view that the GFMD’s role would be critical in providing such a state-led but not state-only platform. Mr. Gibril Faal, Director of GK Partners and Chairman of the African Foundation for Development(AFFORD), on the other hand, called for a comprehensive understanding of the economic contributions of labour migration in countries of destination, transit and origin. He stressed that changing the predominantly negative perception about migration requires not only facts but, more importantly, leadership in spreading the positive stories of migrants. He shared his observation that in dealing with migration and development challenges, many policymakers and practitioners tend to be “over-principled but underperforming”.

Please find in this link the Executive Summary of the GFMD Thematic Recollection (2007-2017). For a quick snapshot of the main elements, focus areas, and action areas contained in the aforementioned document, please refer below: 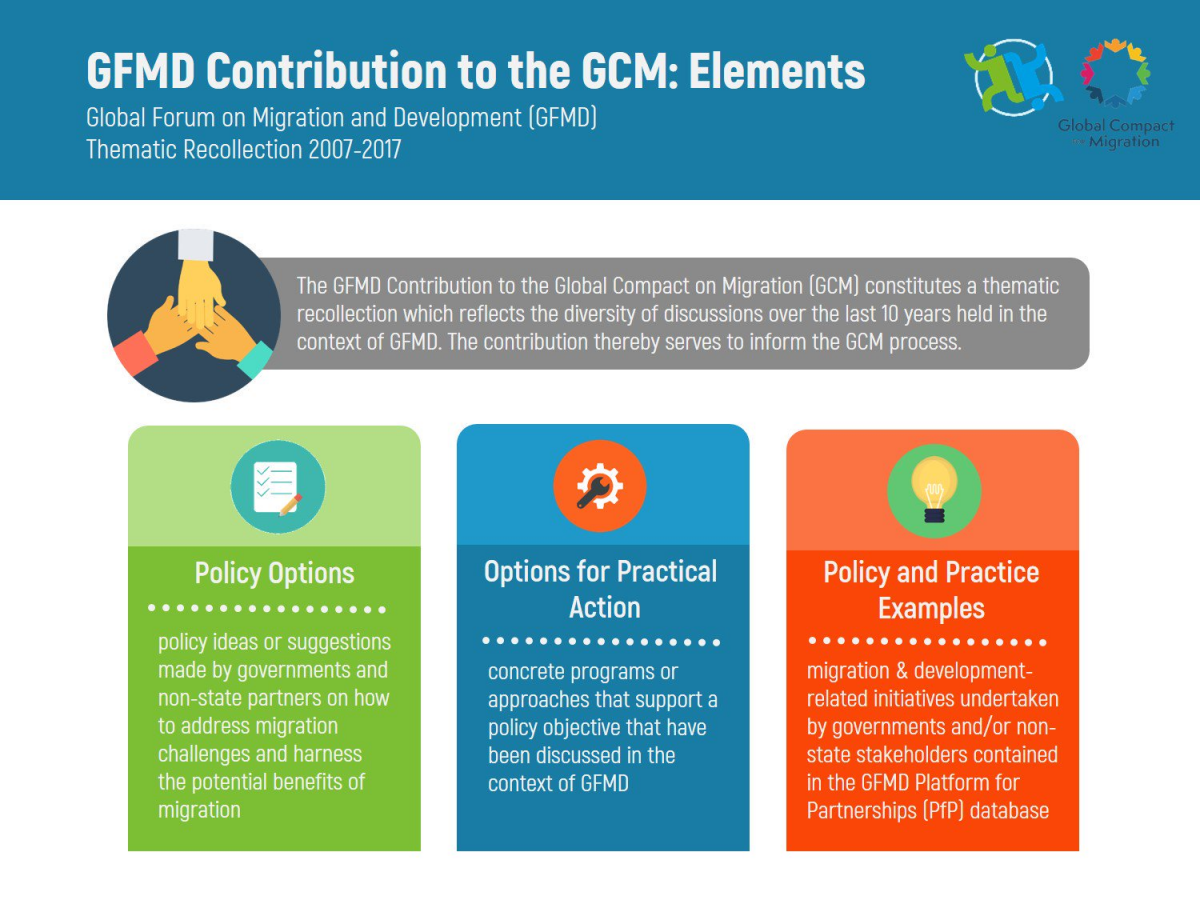 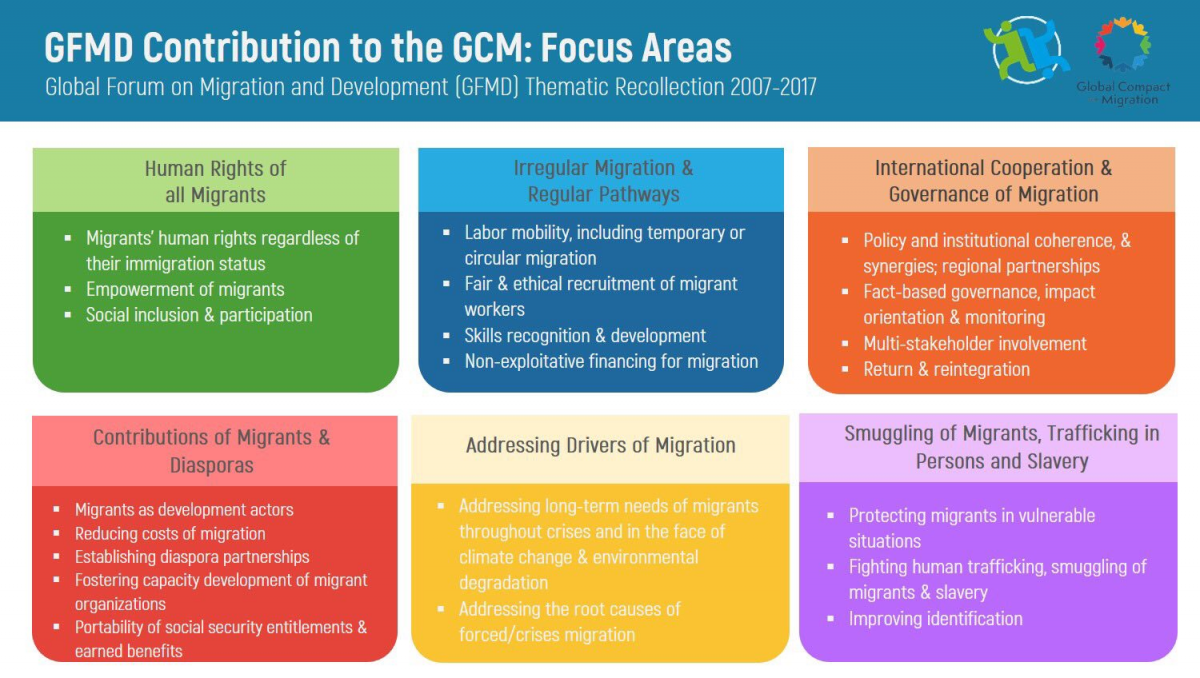 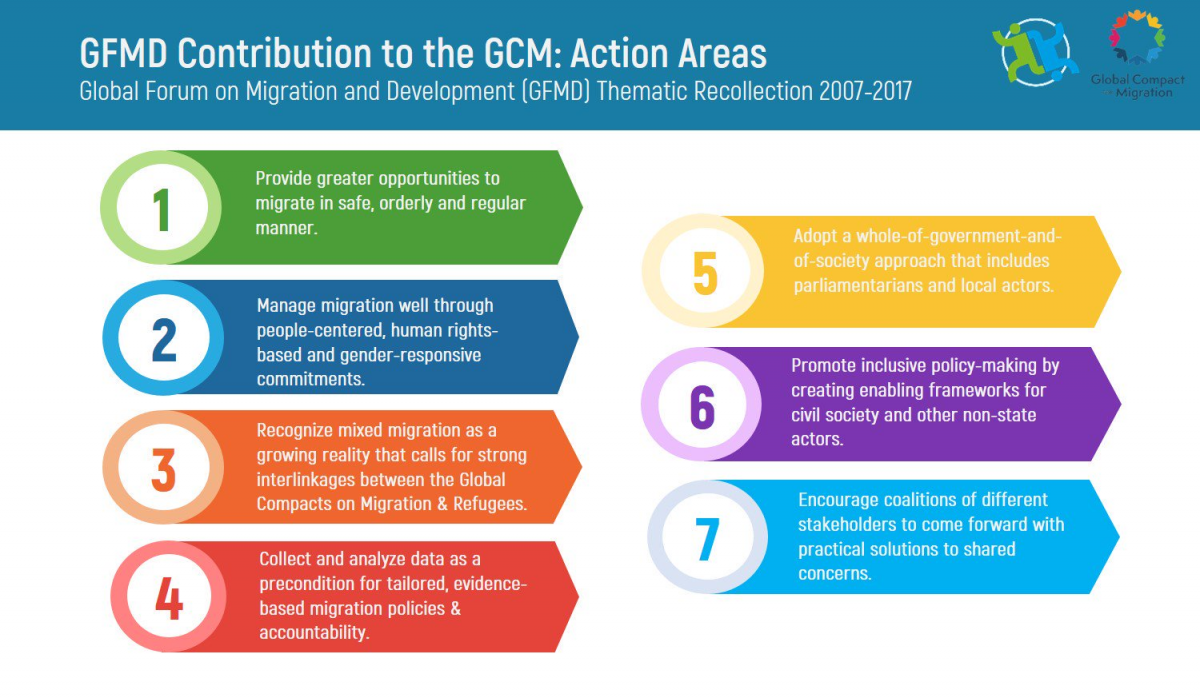