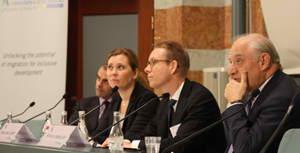 On 31 January 2013, the Government Offices of Sweden organized a national launch of the Chairmanship of the Global Forum on Migration and Development (GFMD) in Stockholm. The purpose of the launch was to spread information about the GFMD and the Swedish Chairmanship in the Forum including the priorities and program and to inform about the existing Swedish policies on migration and development. It also aimed at raising awareness among Swedish actors of the Swedish Chairmanship and inspire to activity within the nexus of migration and development.

The half-day event brought together more than 130 persons representing the Government Offices of Sweden, relevant Swedish authorities, the civil society and the private sector, international organisations and representatives from Embassies in Stockholm as well as the media.

During the launch, Mr. Tobias Billström, Minister for Migration and Asylum Policy, and Ms. Sofia Strand, State Secretary to the Minister for International Development Cooperation, Gunilla Carlsson, participated in a panel discussion together with United Nations Secretary-General’s Special Representative on Migration and Development, Mr. Peter Sutherland. This panel discussion was moderated by Dr. Khalid Koser, Deputy Director and Academic Dean at the Geneva Centre for Security Policy. A second panel discussion was also held which focused on Swedish actors and how they could engage in issues concerning migration and development during the coming 18 months of the Swedish Chair.