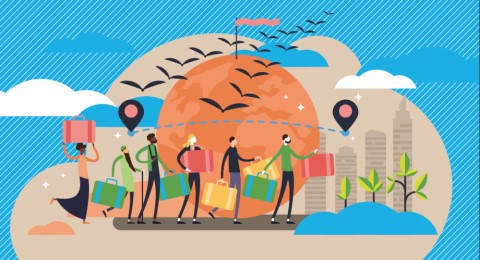 Public attitudes towards migration and migrants have become deeply polarized on an international scale, fueled in part through the spread of misinformation. The dissemination of inaccurate narratives in this respect can hold negative implications for migrants and host communities alike. States, local governments, civil society and the private sector have an opportunity to respond by working to promote a balanced and evidence-based public narrative on migration, recognizing the broader impact this narrative can have on social cohesion, support for diversity, economic growth and innovation.

The GFMD Ad Hoc Working Group on Public Narratives on Migration was created in February 2020 to bring all GFMD stakeholders together to pursue this common purpose. Upon the proposal of the Government of Canada, the GFMD Steering Group unanimously endorsed the creation of the Working Group. Recognizing the important role of cities and local communities in achieving balanced narratives on migration and promoting social inclusion and integration for migrants, the Steering Group also endorsed for the first time that a GFMD Mechanism -- the Mayors Mechanism -- should act as a Co-Chair of a GFMD Working Group alongside governments. In September, the Government of Ecuador also volunteered to co-Chair the Working Group.

With an initial two-year mandate, the current work plan of the Working Group is built around three objectives, namely: 1) enhancing capacity of WG members and the broader GFMD community on the subject of migration narratives; 2) fostering the creation of concrete partnerships and joint activities that will contribute to shifting the narrative on migration; and 3) providing recommendations on the topic of migration narratives for the GFMD’s contribution to the implementation, review and follow up of the 2030 Agenda and the Global Compact for Migration (GCM).

As an immediate priority in 2020/21, the Working Group is advancing the development of global, multi-stakeholder communications campaign to showcase migrants’ contributions, including in the context of COVID-19 response and recovery, and help balance the narrative about migration. The campaign, which will be positioned as an initiative of the GFMD, will be diverse in scope, engaging a wide range of governments, cities, businesses, civil society groups, youth organizations and other non-traditional partners.

Contact
The Working Group is currently Co-Chaired by Canada, Ecuador and the GFMD Mayors Mechanism. The Co-Chairs can be contacted at: wg_narratives@gfmd.org.