The Turkish Chairmanship was organized under the overarching theme of “Strengthening Partnerships: Human Mobility for Sustainable Development”. The theme recognized that international migration cannot be addressed effectively by any one country alone, or by states without the cooperation of other stakeholders - including international organizations, civil society, the private sector and migrants themselves. It also emphasized that mobility, within the right policy framework, is a positive factor for development.

Turkey assumed the GFMD Chairmanship in July 2014 at a time when the world’s attention had been focused on migration more intensely than at any time in a generation, and there was a real sense of crisis. The GFMD 2014-2015 thematic agenda had three key objectives. Firstly, to enhance migrant-focused migration management, focusing on the rights, dignity and well-being of the migrant, and incorporating a variety of perspectives, including those of civil society and migrants themselves. Secondly, to promote the universal recognition of the development impact of migration in public policies. Lastly, to strive to engage relevant stakeholders in strengthening the linkages between migration and development.

The GFMD 2014-2015 highlighted key issues that governments and all concerned stakeholders could continue to help translate into action, including the protection and assistance of migrants in countries in crisis and migrants in transit, lowering the human and the financial costs of migration, and mobilizing the diaspora and migrant entrepreneurs in helping realize the 2030 Agenda for Sustainable Development.

Recognizing the crucial role of the private sector in international migration, the Turkish GFMD Chair built upon earlier GFMD initiatives to strengthen the interaction mechanism with business leaders, who play a key role not only in enhancing migrants’ protection and minimizing the costs of migration, but also in harnessing the development potentials of migration for businesses, societies and migrants alike. In Istanbul, Member States endorsed the start of a pilot GFMD business interaction mechanism in 2016 (now the ‘GFMD Business Mechanism’).

Eighth Summit Meeting of the Global Forum on Migration and Development 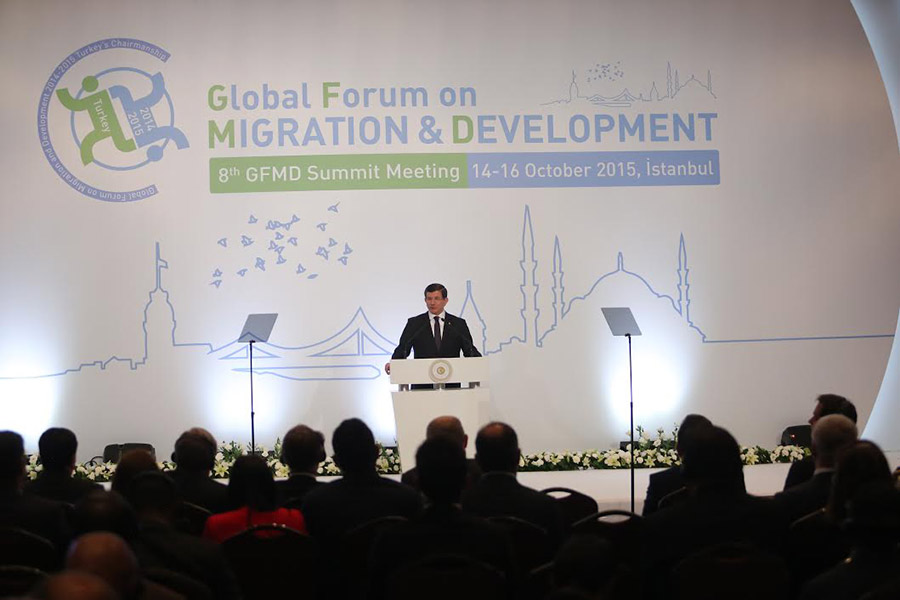 The Summit in Istanbul echoed two recurring themes.One was the need to take action. Although the GFMD is not a body that makes binding decisions, many expressed that it cannot be ‘just about talk’. The second recurring theme was the imperative need for partnerships - amongst countries, between civil societies and governments, and with the private sector - to translate discussions on migration and development into concrete policies and programs that actually benefit migrants, their families, societies and countries.

Three roundtables, each with two sessions, elaborated upon the overarching theme; in addition, three thematic meetings on cross-cutting issues were held to provide more evidence-based inputs into the Roundtable discussions.

Roundtable 1 focused on ‘Human mobility and the well-being of migrants’, aiming to identify specific forms of cooperation among states, and between states and other stakeholders, to (a) protect and promote human rights in the context of mobility and (b) to increase transparency and lower fees associated with recruitment and money transfer.

Roundtable 2, on ‘Migration as a factor in development’, explored the mainstreaming of migration into planning at the sectoral level, and the relationship between migration policy and the implementation of the SDGs.

Lastly, Roundtable 3, entitled ‘Enhancing international cooperation on emerging issues in migration and mobility’ sought to refresh the GFMD agenda to ensure its continuing relevance, examining the enhancement of human development and human security of forced migrants through international cooperation, and the possibility of private sector-government partnerships to support migrant and diaspora entrepreneurship.

The thematic meetings, held throughout the year in Geneva, sought to address specific thematic issues in order to feed into the RT discussions and the Summit meeting. The first thematic meeting, held in February, discussed the treatment and placement of migration in the post-2015 development agenda, including ways to promote decent work and to facilitate well-managed migration.

The second thematic meeting, held in April, explored the role of communications in promoting widespread recognition of the benefits of migration, improving public perceptions of migrants, combating discrimination, and promoting integration.

The final thematic meeting, held in September, focused on recognizing the contributions of women migrants to economic and social development, both in countries of origin and of destination, and addressing their specific needs, particularly concerning respect for their human rights.